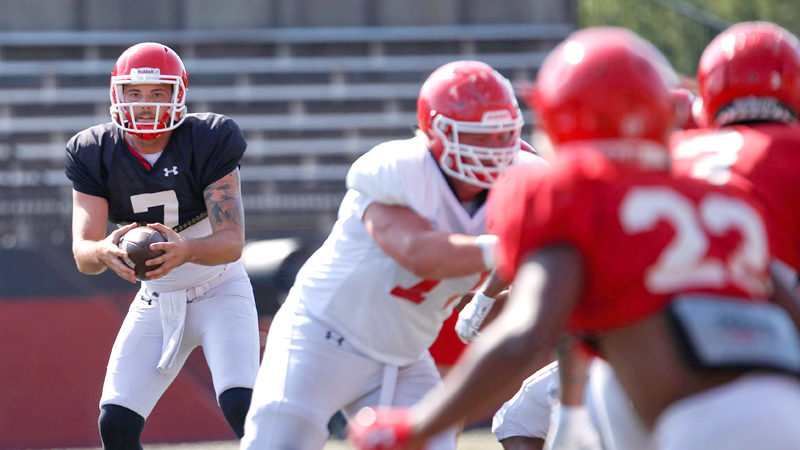 And no one could fault the veteran quarterback for those feelings as he entered fall camp this week.

“I won’t lie. I was pretty nervous coming back,” Mays said on Saturday. “I mean, I’ve had so many injuries in the past, just nagging stuff here and there, that I really thought something was going to spring a leak in the first couple days.”

It had been months since the senior had taken part in team drills. After playing minimally last season – seeing time in just four games – then only doing individual drills during spring practice due to a nagging nerve issue in his leg that required surgery, the senior was back on the field Saturday at Stambaugh Stadium during the team’s first scrimmage of fall practice.

And though YSU football coach Bo Pelini insists he won’t be naming a quarterback until 3 p.m. on Aug. 24 – kickoff time for the Penguins’ season opener against Samford – Mays looked every part like a No. 1 quarterback during Saturday’s scrimmage.

“I’ve been fortunate enough to remain as healthy as I’ve felt all summer. And I feel as good as I have in a long time,” Mays said. “I’m really confident in the way I’m playing right now and my body feels great.”

Mays took the first snaps with the first-team offense on Saturday, going against the first-team defense. His throws, mostly in short-yardage plays, were crisp and on target, before airing it out on a few deeps balls. His most impressive throw of the day was a 38-yard pass to tight end Kyle Gregg, which set the Penguins up inside the 10-yard line. London Pearson capped off the drive with a touchdown two plays later.

In his three series leading the offense, which was the maximum any quarterback had on Saturday, Mays was 10 of 11 for 126 yards and one touchdown, which came on a wheel route to tailback Braxton Chapman in his final series of the afternoon. He was a perfect 9-for-9 until throwing his first incomplete pass.

And maybe the most important stat of all, he finished with 40 yards rushing, looking unafraid to use his legs on quarterback keepers up the middle despite dealing with the nerve issue that sidelined him for the better part of the past year.

“I thought I played pretty well, pretty efficient, got our guys the ball in space, made right decisions when I had to, and I think it showed. I think I only had one incompletion the whole day,” Mays said. “We never really put ourselves behind the chains, against our defense that’s the worst thing you can do, so keeping ahead of the sticks, we played pretty well today.”

Pelini was pleased with not only Mays, but all the quarterbacks who took snaps on Saturday.

“Nate’s played a lot of football. I think he’s confident. I thought he had a good day,” Pelini said. “I think he’s getting better. A lot more decisive in his reads. And Joe Craycraft had a good day. And Mark Waid, he’s young but he’s going to be a really good football player. I thought all three quarterbacks who took a majority of the reps played well.”

Despite the solid day from Mays, who is the only quarterback on YSU’s roster who has taken a collegiate snap, Pelini insists he “hasn’t even thought about” naming a starter and that the depth chart will “work itself out.”

No matter who wins the job and when, or whether Saturday’s quarterback lineup was a signal of the future depth chart, all of the quarterbacks are ready if and when their names are called.

Especially Mays, who has gotten used to waiting things out.

“We don’t really talk about it like that,” Mays said of the quarterback competition. “Everyday you just gotta come out and compete like your job’s on the line, like every snap counts. And that’s the way you gotta treat every year, no matter if you’re a starter or if you’re in a competition. So it’s nothing new to me. I’ve been in a competition every year I’ve been here. Being the guy that’s had my name called at the drop of a hat, I’m plenty used to that.”