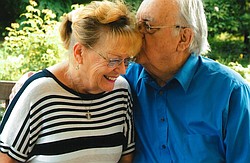 Alexander-Attila and Diane Nemeth of Coitsville will be honored during a buffet dinner at 5 p.m. Aug. 31 at the Heritage Golf Club in Hilliard for their 50th wedding anniversary.

Mrs. Nemeth has worked as a registered nurse in various hospitals for 50 years. She is the nursing supervisor at Humility House in Austintown. She was the bicentennial secretary in Coitsville, is a member of Sigma Theta Tau and has been active in the church choir for more than 50 years.

Mr. Nemeth was a social worker with Mahoning County Human Services before retiring in 1996. He was the CEO of Recreation Enterprises, dba Fun City USA in Coitsville, sold antiques for 23 years, is a member of the American Philatelic Society and also sings in the church choir.

The couple are members of Hungarian United Presbyterian Church in Youngstown.