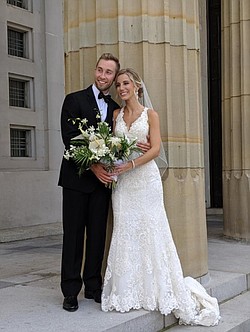 The wedding of Jaimie DeMaiolo and Connor Beerck took place at 5:30 p.m. July 27 at the Hilton Netherland Plaza in Cincinnati.

The Rev. Todd Toole officiated for the daughter of Jerry and Carolyn DeMaiolo of Austintown and son of Daniel Beerck and MaryPat Carletti, both of Cincinnati.

A reception followed at the hotel, and the couple departed for a honeymoon trip to Hawaii. They live in Cincinnati.

The bride’s ivory gown was embellished with Swarovski crystals and pearls and featured an open crisscross back.

Mrs. Beerck graduated from Miami University with a master’s degree in education specialist and is employed as a school psychologist at Springmyer Elementary School in the Oak Hills Local School District in Cincinnati.

A graduate of the University of Cincinnati with a bachelor’s degree in civil engineering, Mr. Beerck is a project manager at Specialty Interiors of Ohio in Fort Mitchell, Ky.