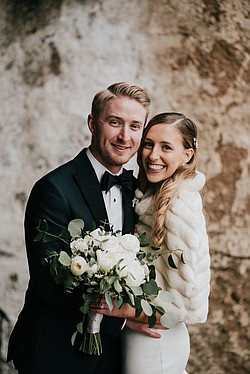 At home in Chicago after a honeymoon trip to France and Spain are Jarrod Carley and his bride, the former Emily Newman, who were married May 11 at St. Hedwig Catholic Church in Chicago.

The ceremony was solemnized by the Rev. Tomasz Wojciechowski, and a reception followed at the Chicago Illuminating Co.

Parents of the bride are Christopher and Anna Marie Newman of Poland. The groom is a son of Kenneth and Robin Carley of Dayton, Ky.

Maids of honor were the bride’s sisters, Alexa, Ashley and Lil Newman. They wore gowns in navy and gray hues as did the bridesmaids, Haley Masciantonio, the bride’s cousin; Lyndsey Arnold; Megan Kertis; Demi Paulus; and Becca Coloutes.

Mrs. Newman earned her bachelor’s degree at Ohio University and is a marketing content manager at Kitchfix in Chicago.

Her husband graduated from OU with a bachelor’s degree and is a clinical specialist at Boston Scientific in Chicago.