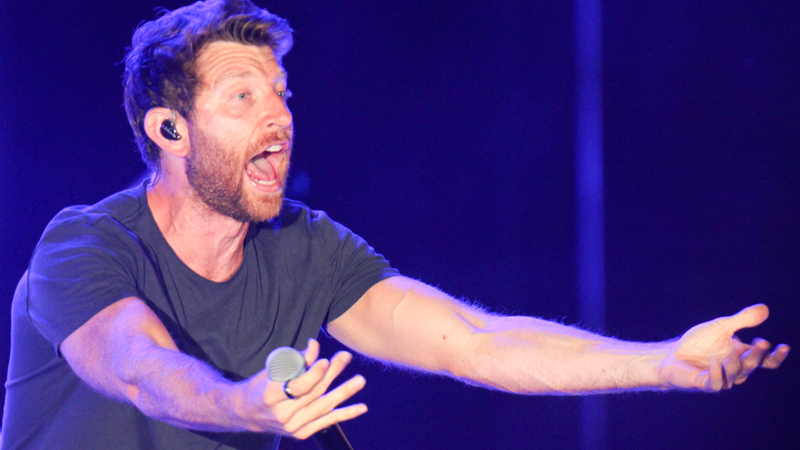 For many Brett Eldredge fans, Friday night’s concert was their first time at the new Youngstown Foundation Amphitheatre, but not their first Eldredge show.

Nella Vuksanovich, who attended with her friends Amanda Gentry and Erika Whiting, traveled from Canton to see the country crooner.

And Friday wasn’t their first time trekking to see him sing.

They have been to concerts in New Orleans, Cleveland and Ontario, Canada. The group even has plans to see him play in the United Kingdom next year.

Friday night’s cloudless weather was the perfect setting for newcomers’ first visit to downtown’s new outdoor venue. Before the show, concert-goers sprawled on the grassy lawn in front of the stage drinking cold beer.

Between songs, Eldredge noted the new stage: “We’re breaking this son of a gun in tonight!” And the animated crowd certainly did as fans clad in cowboy boots danced, drinks in hand.

“He’s someone you’d want to sit down and have a beer with.” said Vuksanovich.

A few gushed about his good looks too.

Eldredge has also been known to bring his dog on stage at his shows.

“There’s a video of him singing ‘You are My Sunshine’ to his dog,” Bailey said.

She attended the concert with her husband Nelson. They’ve also seen Eldredge in Cuyahoga Falls and Pittsburgh, but it was their first trip to the amphitheater.

“It is great that Youngstown has these facilities,” Bailey said. “I grew up here. I’ve lived here my whole life. It’s so nice to see this town resurrect.”

Heeter echoed the sentiment. “We have to support our own area,” she said. “With someone like Brett Eldredge coming, hopefully next time, Tim McGraw.”