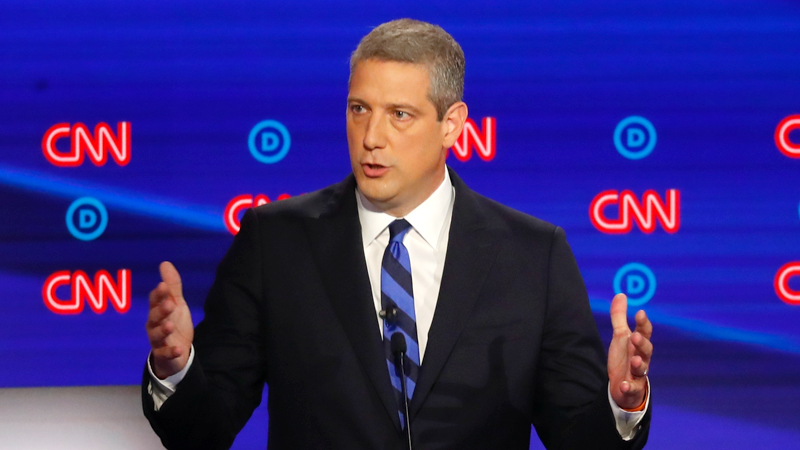 Though he’s highly unlikely to make the September debate stage, U.S. Rep. Tim Ryan said his campaign has momentum and he has no plans to get out of the race.

“If I feel we’re growing and moving – and I think we are – we’ll keep going,” he said Wednesday, a day after he appeared at the second Democratic presidential debate in Detroit. “People don’t know me, and they’re getting to know me and they’re liking me.”

Ryan said he was pleased with his Tuesday performance in which he sparred with U.S. Sen. Bernie Sanders, one of the Democratic presidential frontrunners, on Medicare for All and providing health care to undocumented immigrants.

To qualify for the third debate in Houston in September and a fourth in October, candidates need at least 130,000 unique donors, with a minimum of 400 different donors from at least 20 states, and at least 2 percent support in four qualifying polls through Aug. 28.

“I think it’s really helpful to be on the debate stage, but if you catch fire online it can come together,” he said of a presidential candidacy.

Ryan said 130,000 donors “is a poor indicator of whether you’ve got a successful campaign.”

He said no one on his campaign has talked of him withdrawing or changing staff.

“We’ve got a good operation, and we’re raising money,” Ryan said. “Voters aren’t ready to make a decision on a candidate yet. We’re raising enough money to keep us going. I’m building this thing out slow and steady. You’ve got to be making progress and we are.”

Mike Morley, Ryan’s campaign manager, said, “To the best of my knowledge there hasn’t been any discussion” of dropping out.

But, he said, “There are probably 15 candidates who have to make a decision for financial reasons [to continue], and Tim is one of them.”

Morley added: “Tim Ryan is going to be part of the conversation. He’ll have a significant role in the 2020 process regardless of whether he’s the nominee.”

Ryan was more aggressive Tuesday than he was during the June 26 initial Democratic presidential debate.

He got into a few exchanges with Sanders of Vermont.

During one, Ryan said Sanders’ Medicare for All plan would upset union workers who have sacrificed pay increases to keep good health-care benefits.

Sanders said a government-run plan would be more comprehensive.

Later, Ryan was answering a question about Sanders’ proposal to eliminate gas-powered car sales by 2040, and the Vermont senator yelled again.

Ryan said to laughter from the audience: “I didn’t say we couldn’t get there until 2040. Bernie, you don’t have to yell.”

During the debate, Sanders’ campaign turned “I wrote the damn bill” into a fundraising effort. Ryan’s campaign started selling “You don’t have to yell” stickers Wednesday afternoon.

When asked if Sanders is always that cranky, Ryan said, “Yeah, pretty much.”

He also said Sanders and U.S. Sen. Elizabeth Warren of Massachusetts, another frontrunner who supports Medicare for All, would “lose 48 states” in the November 2020 election to President Donald Trump, a Republican, with their platforms.

“I think it’s hard for any nominee to win with trying to take away private health insurance,” Ryan said. “It’s not in line with where we want to be. That and decriminalization on the border and free health care for undocumented people are real problems for us. It’s not how you appeal to working-class people.”

He added: “You can be big and bold, but you have to be respectful of people.”

Ryan said he thought he scored points in his exchanges with Sanders.

“I told him he doesn’t know the union contracts,” Ryan said. “He has no clue about that. Some of this is fantasy land. We need someone to unite the country. I don’t think the solutions [Sanders and Warren are] offering resonate with workers. They scare people. You can’t be the party of scaring people.”

Ryan received criticism for being the only candidate to not put his hand over his heart during the national anthem. Ryan, instead, folded his hands in front of him.

Ryan said it was an oversight, and the issue was “blown out of proportion.”

That’s because, he said, “Republicans know after watching [Tuesday] I’m a very dangerous candidate. They’re not going to play the open border card or the Medicare for All card or decriminalization on the border with me.”