The Barbers mark jubilee with family 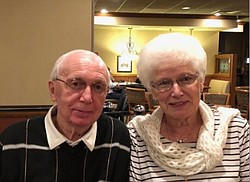 Dominic and Marilynn Barber of Boardman recently celebrated their 50th anniversary during a dinner that was hosted by their children and grandchildren. The couple’s children are Brian (Tracie) Barber and Charisse (Nick) Mayhew, all of Boardman. Five grandchildren, Dominick, Christopher and Anthony Barber, and Keaton and Kaden Mayhew complete their family.

Mrs. Barber worked as a secretary in the Farrell School District prior to retiring.

Mr. Barber worked as a captain of the fire department for the city of Youngstown. He retired after 34 years. He is a veteran of the U.S. Army Reserve.

The couple are members of St. Angela Merici Parish in Youngstown and St. Charles Borromeo Catholic Church in Boardman.