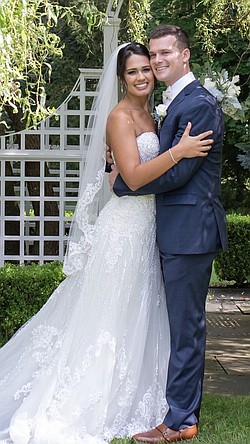 The Rev. Jack McDonald heard the exchange of vows between Kerry Larkin of Brick, N.J., and Nicholas Elliott of Jackson, N.J., during a wedding ceremony Aug. 12, 2018, at Shadowbrooke at Shrewsbury in Shrewsbury, N.J.

After the newlyweds accepted congratulations at a reception at Shadowbrooke, they honeymooned in Cabo San Lucas, Mexico. The couple reside in Brick.

The bride is a daughter of Thomas and Aledya Larkin of Brick, and the parents of the groom are Kevin and Lisa Elliott of Poland.

The bride wore a strapless lace gown adorned with beading. It featured an embroidery pattern throughout and a sweetheart neckline. The illusion back was accented by an extended chapel-length train.

Megan Larkin, the bride’s sister, was maid of honor, and Kasey Alvino, another sister of the bride, was matron of honor. Bridesmaids, wearing sky-blue dresses, were Katie Elliott, the groom’s sister; Madina Fischer; and Stefania Gonzalez. Lucy and Lilly Swanhart were the flower girls.

Mr. Elliott graduated from the University of Mount Union with a bachelor’s degree in economics and earned a master’s degree and post-graduate certification in accounting from Monmouth University. He is a certified public accountant with Hill, Barth & King in Princeton, N.J.