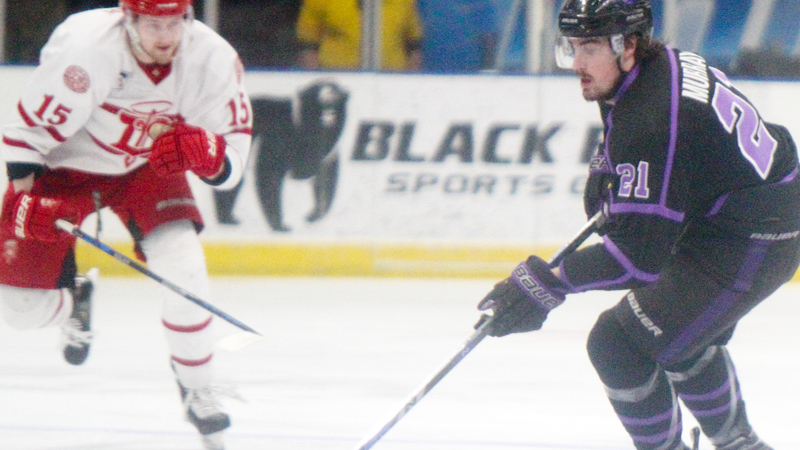 Trailing by a goal late, the Youngstown Phantoms were rewarded with a golden opportunity when Dubuque Fighting Saints forwards Riese Gaber and Dylan Jackson were sent to the penalty box at the same time.

The Phantoms kept the puck in the Saints’ zone for the next 108 seconds. But Saints penalty killers JD Greenway, Jacob Semik and Chris Lipe kept the puck as far from goaltender Matthew Thiessen as imaginable.

That penalty kill plus Derek Contessa’s empty-net goal with 31 seconds remaining lifted the Saints to a 3-1 victory and a 1-0 series lead in the opening round of the USHL’s Clark Cup Playoffs.

The Phantoms must win tonight at the Covelli Centre to force a deciding Game 3 on Wednesday.

“We were trying to get a little bit of movement,” Phantoms head coach Brad Patterson said of the methodical approach with two extra skaters. “They guys didn’t like the looks at the net.

“They did a good job of blocking shots,” Patterson said. “At the end of the day, you’ve got to get [the puck] to the net.”

Forward Jack Malone said the Saints’ defenders “did a good job of getting to the lanes and keeping us to the outside. We had some shots but ... we have to take advantage of situations like that.”

Despite Saturday’s overnight trip from Iowa to Ohio, the Fighting Saints dominated the first period, outshooting the Phantoms 11-4.

“They outskated us,” Patterson said of the start. “As the game went on, we got better.”

The Saints took the next six shots, then the Phantoms thought they scored but Matthew Barnaby’s goal was waved off because of goaltender interference by Josh DeLuca.

Midway through the second period, the Phantoms took a 1-0 lead when Brett Murray, the USHL’s regular-season goals leaders with 41, beat Thiessen with a top-shelf shot from along the goal line.

“Lucky bounce,” Murray said, explaining that his forehand shot went of Thiessen’s helmet. “I saw him come out, leaning forward a bit.”

Defenseman Jeppe Urup received an assist for his long pass from inside the Phantoms blueline to the boards and then Murray.

“We were trying to catch them on a change,” Murray said. “I ended up behind them.”

Two minutes into the third period, Bram Scheerer tied the game on an assist from Kaelan Taylor.

About 10 minutes later, Gaber set up Jackson for the go-ahead goal.

After finishing the regular season with a 12-3 streak, the Youngstown Phantoms find themselves on the brink.

“I don’t think we are frustrated,” Murray said.

“Short-term memory is a key you’ve got to have ... especially in a three-game series.”

“Forget the bad things you did today, focus on the good,” Malone said.