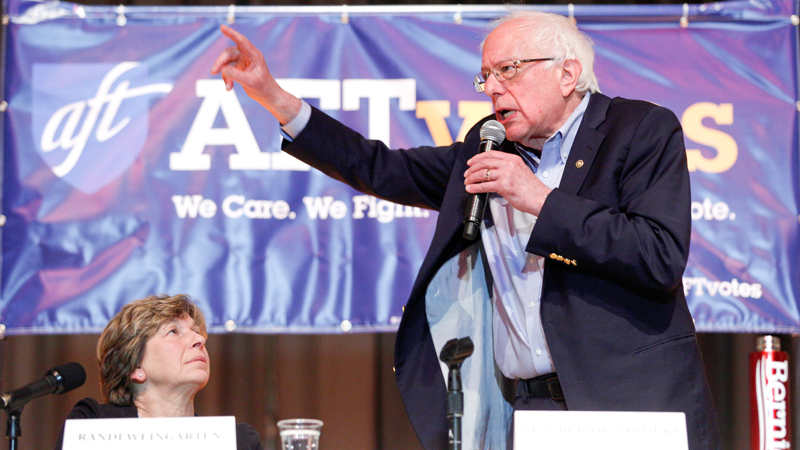 Sen. Bernie Sanders, I-Vt., made the first local stop of his presidential campaign Sunday when he visited Lordstown High School before an evening rally in Pittsburgh.

“Our job now is to tell Wall Street that whether they like it or not, they’re going to be good corporate citizens,” he said. “That means if entities like General Motors think that they can throw workers out on the street while they’re making billions in profit and move to Mexico and pay people there starvation wages and then line up to get federal government contracts, well they got another thing coming.”

Sanders said he would freeze federal contracts for GM and other corporations that don’t pay their workers living wages or that shut down plants and outsource jobs to seek cheap labor. He also called on Trump to be “tough” and do the same.

The audience was largely filled with Sanders supporters and curious Democrats. Any mention of GM being held accountable for “idling” the Lordstown Assembly Complex garnered thunderous applause from the crowd.

While Sanders supporters tried to drown out the press conference with chants of “Bernie,” the Republicans argued that Sanders’ policies would kill jobs nationwide and progressive programs such as Medicare for All and the Green New Deal would result in massive job loss in certain industries.

The Republicans argued that under Trump, unemployment has decreased, and 2.6 million jobs have been added.

Timken said that Medicare for All would result in 200 million individuals kicked off of their private insurance. Under Medicare for All, all citizens are covered under a state-run system similar to the majority of other wealthy countries.

“We cannot go back to the broken, failed socialist agenda of past administrations,” Manning said.

Stephanie Steen, a nurse from Orwell who attended the event, is a Sanders supporter and proponent of Medicare for All.

“I’ve been a nurse for 20 years, I’ve seen how things don’t work, I’ve watched people have to ration medicine or just go without it because they can’t afford it. We live in the U.S.; that shouldn’t be happening,” she said. “We have money to spend on everything except taking care of our own.”

Just before Sanders addressed the public, he met with Lordstown educators, students from the high school’s political history club and a small group of auto workers from the Lords-

Katie Fallo, an educator from Niles who attended the event with her 8-year-old son, Ben DeLong, asked the senator how she could bring people together despite the divisive political climate.

Despite the Lordstown plant playing a central role in the discussion, leadership from the United Auto Workers Local 1112 did not make an appearance, nor did representatives from the Drive It Home campaign.

A spokesman for Drive It Home said the campaign is nonpartisan and – while it is happy to accept help and work with any entity willing to aid in the fight to get a product back in Lordstown — will not explicitly support any candidate.

UAW Local 1112 President Dave Green said he was unable to make it to the event.

Chuckie Denison, a retired GM worker who is a founding member of the recently organized Mahoning Valley chapter of Our Revolution, a pro-Sanders political action group, said Sanders actually visiting the village was important to him and his fellow workers.

“It means everything that he came here to visit us and the plant,” Denison said. “The dude is all about labor. He’s not out giving speeches to Wall Street groups; he’s going to strikes and walking picket lines. You can’t take Wall Street and corporate dollars and then turn around and say you’re on the side of the people.”