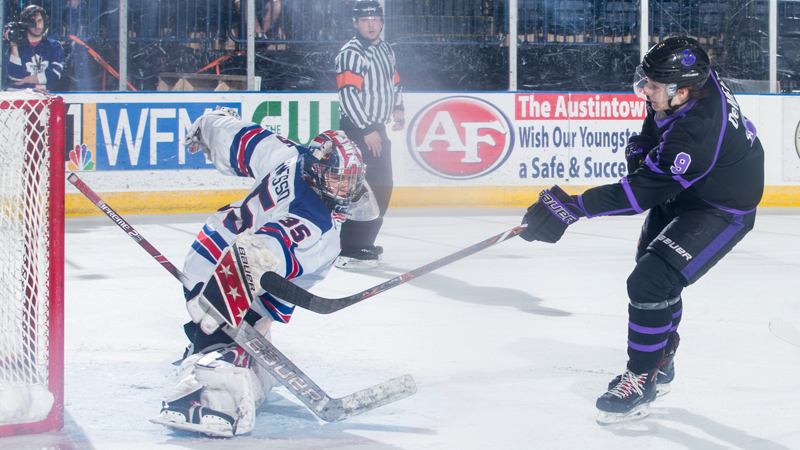 The Youngstown Phantoms went 12-3 in their final 15 games. It just wasn’t quite enough to grab a first-round bye for the USHL’s Clark Cup Playoffs.

Overcoming a brutal 2-6-0-2 start, the Youngstown Phantoms came to life to earn third-place in the Eastern Conference standings.

“Our message at the start of the year was to get better every day, it wasn’t to sweep through the first two months of the season,” Phantoms head coach Brad Patterson said after Saturday’s 4-1 victory over Team USA’s 17U squad at the Covelli Centre. “We knew it was going to take time.

“We started 0-6 and we finished strong.”

The Phantoms return to the postseason for the third straight year and sixth time in 10 seasons.

The Phantoms tied the Cedar Rapids RoughRiders for third place. The Phantoms get the higher seed because of more wins in regulation and overtime.

The USHL’s Clark Cup Playoffs will begin Monday at the Covelli Centre with the Phantoms hosting sixth-place Dubuque (29-25-4-4, 66 points) in a best-of-three series. Game 2 will be played Tuesday. If necessary, Game 3 will be played Wednesday.

It’s rematch from last season when the Phantoms swept the Fighting Saints, 3-0.

“They are a way different team,” said forward Joey Abate who played his second straight game after missing five weeks with a shoulder injury.

“They are a little more experienced,” Abate said.

After a sluggish start, the Phantoms scored three goals in the second period to take control.

Defenseman Gianfranco Cassaro’s shot from near the boards tied the game at 1-1. Connor MacEachern assisted on the power-play goal.

“[He] curled up the half-wall and found me up high and I just shot it,” Cassaro said. “Coach preaches shoot the puck ... I’m happy to get that one.”

“Somebody fed it to me,” DeMelis said, adding it might have been Dalton Messina or Jeppe Urup. “It was kind of a broken play.”

DeMelis deked a USA defender to zoom ahead for his break.

“Defender was coming at me so I stepped to the middle,” DeMelis said. The other [defenseman] was off to the side. It felt nice, the win feels real good.”

Brett Murray scored his team-record 41st goal on an assist from MacEachern for a 3-1 lead.

MacEachern scored the only goal of the third period, his 26th.

“We’ve gotten better as the year has gone on,” MacEachern said.

Should the Phantoms oust the Buccaneers, they’ll begin at best-of-five series against the Steel in Illinois next weekend.