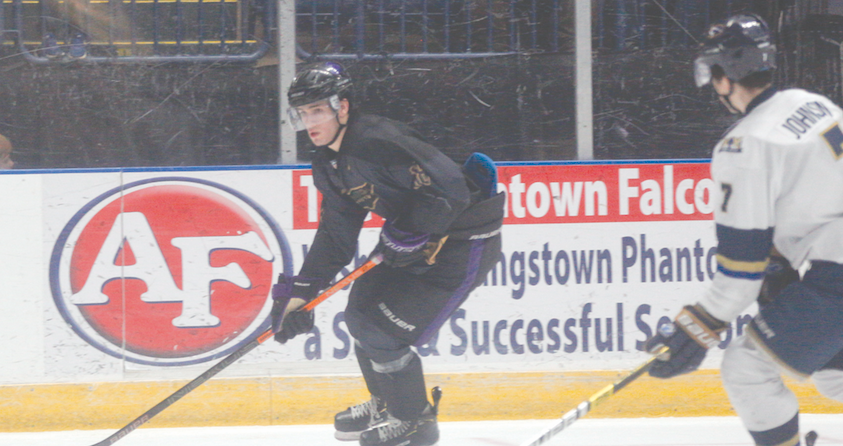 The clock ran down and Youngstown Phantoms goalkeeper Christian Stoever let out a sigh of relief.

Stoever recorded his first USHL shutout in the Phantoms’ 3-0 win over the Sioux Falls Stampede on Saturday in the Covelli Centre.

The Northville, Mich., native stopped 27 shots as the Phantoms rebounded from a 4-1 loss to Sioux Falls on Friday.

“Guys were great out there blocking shots,” Stoever said. “It was definitely a much better performance out there than last night’s loss. Overall, just the boys were great.”

Brett Murray scored his 40th goal of the season in the second period. He leads the USHL.

The Phantoms cleared the puck into the offensive zone. Calvaruso took the puck behind the net and looked to pass to a teammate on his left. Murray came in from the blind side and scored on a wrap-around.

Murray also recorded his 73rd point to bring him within three of Chicago’s Nick Abruzzese for the league lead.

“Brett Murray’s a great player with great hockey instincts. And he felt like he could get in there, make something happen and create chaos,” Phantoms head coach Brad Patterson said.

Phantoms forward Dalton Messina opened the scoring with his ninth goal of the year, a rebound with 11:24 left in the first period. Craig Needham and Jayson Dobay were credited with assists.

Gianfranco Cassaro in the third on a shot that kicked in off the bottom of the crossbar. Connor MacEachern got the assist.

The Phantoms have a chance to clinch home ice in their first-round playoff game.

With two games remaining, the Phantoms are tied with the Cedar Rapids RoughRiders (73 points) for third place in the Eastern Conference. Team USA (68) is fifth after a 3-1 loss to Fargo.

Youngstown has a home-and-home with the Team USA 17Us next weekend. They will play the in Michigan on Friday before closing out the season on Saturday.

Phantoms forward Jack Malone went down on a illegal hit into the boards by Austen Swankler. After a couple scuffles, Swankler was called for a hit to the back.

Malone returned for the third period, but Sioux Falls wasn’t so lucky.

The Stampede lost Calvaruso on Murray’s goal. He went down as the puck hit the back of the net.

Trainers removed Calvaruso’s left pad and his skate to work on his leg. He was helped off after a several minutes on the ice.

The Phantoms needed their penalty kills early and often.

Sioux Falls went 0 for 8 on the power play. Youngstown killed off all 14 of the Stampede’s power plays in the two-game series.

“Tonight, I felt like we were tenacious on pucks, we won the 50-50 battles and we were able to roll eight or nine forwards on the kill and used all our [defensemen], and that’s huge,” Patterson said.”