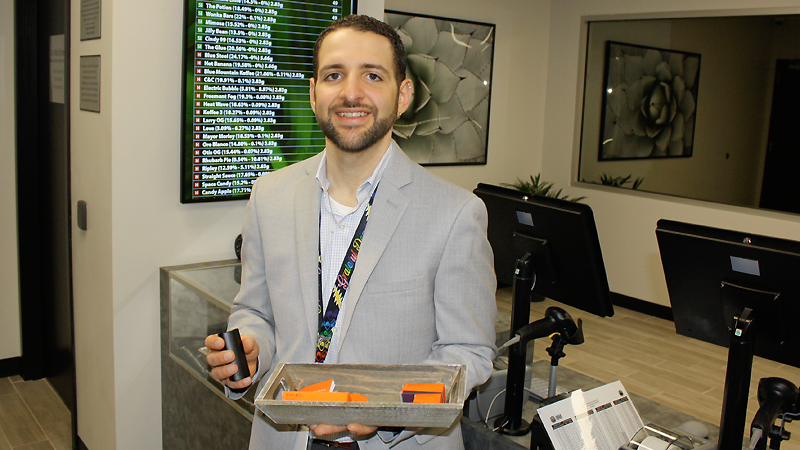 Robert Willard of Niles was among the people who turned out Friday morning with his medical-marijuana identification card to buy the product at gLeaf Medical Cannabis, the first dispensary to open in Mahoning and Trumbull counties.

Willard, 49, broke his neck in a 2004 work-related accident and says one of the greatest benefits of the legal marijuana he recently started buying from a dispensary in East Liverpool is the emotional benefit.

“It helps with depression. It helps with the pain. It’s similar to taking pain medication,” he said. “Now it’s legal to use as medicine, so I’m taking advantage of it,” he said. Next, he hopes insurance will start to cover it.

A.J. Caraballo, pharmacist and general manager of gLeaf Medical Cannabis on Youngstown Road, gave reporters a tour of the facility a few hours before it opened, and he answered a multitude of questions.

The tour involved three small areas of gLeaf’s building and one large one — an entrance foyer with a small reception office, a consultation room were Caraballo will meet with patients and a larger area where medical marijuana and accessories such as vaporizers are sold.

The facility is filled with images of flowers and leafs, but because of the tight regulations under which such facilities operate, no images of marijuana can be shown. Nor could Caraballo pose with any of the product because state regulations ban him from showing it to anyone who lacks a medical marijuana card.

Patients visiting the facility Friday were limited to only buying marijuana flower, the part of the cannabis plant that has gone through the cultivation, harvest, drying, and curing process.

The facility will be selling two other types in the coming weeks — tinctures, which are alcohol-based liquids; and marijuana-infused edibles. But the facility has been having trouble getting those, Caraballo said.

It is typically smoked in the recreational setting, but it is illegal to smoke medical marijuana, he said. The better way to consume it is through a vaporizer, of which gLeaf sells several kinds, he said.

Vaporizing is a better method because it heats up cannabis to about 400 degrees and throws the relevant compounds, such as THC, into the air so a patient can inhale them. That preserves about 90 percent of the medical compounds in the drug.

Burning it can produce temperatures up to 1,200 degrees, which destroys most of the chemical structures a patient wants, he said.

If a patient were pulled over by police and found to be smoking medical marijuana, they could be charged with possessing drug paraphernalia.

Inside the sales room is a listing of strains of medical marijuana for sale, each one considered a one-day supply, which Caraballo said will last most people more than one day. The price ranges from $120 per one-day supply of 8.4 grams of Jilly Bean to $43 for 2.83 grams of Blue Steel.

There are 26 doctors in Mahoning and Trumbull counties certified to recommend medical marijuana to patients, but not all are involved in the process yet.