Portman “disappointed” in lack of GM commitment to reinvest in Lordstown 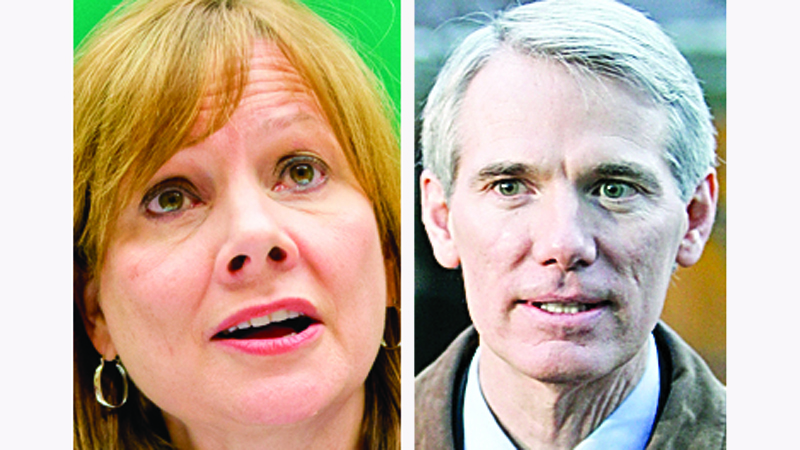 U.S. Sen. Rob Portman came away from a Tuesday meeting with General Motors CEO Mary Barra “disappointed” in what he heard – or rather, did not hear – about the future of the GM Lordstown plant.

“It was a very candid discussion,” Portman, a Cincinnati-area Republican, told The Vindicator. “I’m not happy. It was disappointing. I pushed her to make a public commitment to the Valley. ... She would not make that commitment.”

The Lordstown plant, which manufactures the Chevrolet Cruze compact car, is now operating on one shift. It lost its third shift early last year, and the second shift was cut this summer. The cutbacks have occurred as sales of the compact car have slumped. The compact Cruze’s sales declined for 11 consecutive months through March, the last month for which a breakdown of the compact car’s sales numbers were released.

The cutbacks have led to questions about the plant’s future, but GM has not indicated what its plans are for the plant.

“We understand the community’s interest in the future of the Lordstown complex,” said Renee Rashid-Merem, GM corporate communications director, global manufacturing and labor communications. “Today, our full attention is on supporting the men and women at the plant who build the high-quality Chevrolet Cruze for our customers. When we have more information about the future of the plant, we will inform our employees first.” Portman’s meeting with Barra marks the second time a senator has met with her and come away with the same message. U.S. Sen. Sherrod Brown, a Cleveland Democrat, told reporters in July that he spoke with Barra before the plant’s second shift elimination went into effect June 22, and that she “would not commit that they will keep that plant open in Lordstown.”

Portman said after speaking with Barra, he felt assured the future of the Cruze is at least safe for now. He also said Barra was appreciative of the strong community support for the plant in the Mahoning Valley, and she “acknowledged the workforce is producing a quality car.”

He also noted the U.S. Department of Labor’s recent approval of a National Dislocated Worker Grant, with an initial award of $875,000 slated to provide employment and training services to workers affected by layoffs at the GM Lordstown plant and Northeast Ohio auto-industry suppliers.

While those funds are helpful, Portman said they are not a solution.

“The answer is to get these people back to work,” he said.

He promised to do his part to make that happen, saying, “I’m going to keep fighting for this community.”