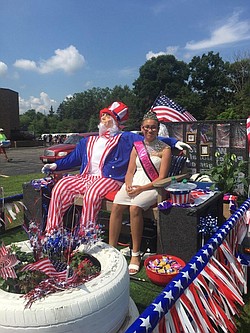 Neighbors | Submitted.The winner of the Ohio Miss Amazing pageant rode on the West Side Tire float for the Fourth of July. The float won best commercial float for the parade. 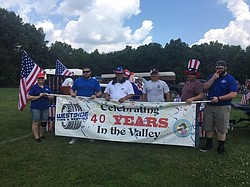 Neighbors | Submitted.Representatives from West Side Tire led the float with a banner, celebrating the businesses 40 years in the Mahoning Valley. The float won best commercial float for the parade. 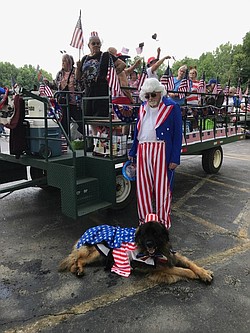 Neighbors | Submitted.Volunteer members of the Austintown Senior Center dressed up and rode on a float for the Fourth of July. The float won best non commercial float entry, which won the center a $100 check and a plaque. 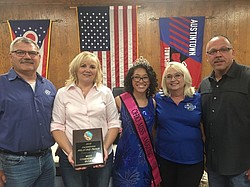 Neighbors | Submitted.Representatives from West Side Tire, along with the winner of the Ohio Miss Amazing pageant, posed with Bruce Shepas, parade chairman, after they were given the award for best commercial float for 2018. 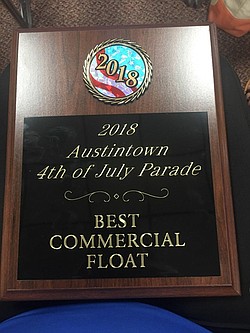 Neighbors | Submitted.The 2018 best commercial float plaque was given, along with a $100 check, to West Side Tire for their float during the Fourth of July parade. 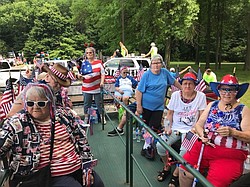 Neighbors | Submitted.Members of the Austintown Senior Center rode on the center's float for the Fourth of July parade which won first best for the non commercial category.

The winners of the Austintown Fourth of July parade float competition received their prizes on Aug. 13.

Bruce Shepas, who has been Parade Chairman for two years and is also the owner of Austintown Bounce, said this year the winners embodied the Independence Day celebration.

Not every float that enters the parade chooses to be judged, though this year 16 floats did participate in the competition.

The awards this year were best commercial, best non-commercial and best overall float.

Shepas also said that they added a community choice award for the first time this year.

The honorary judge was Cody O’Connell, the 7-year-old who created a Little Free Library, a free book exchange, in his neighborhood.

O’Connell chose the VFW Post # 4237 as the community winner.

Parker received a plaque and a check for $100, which was donated to the Austintown Police Department.

Lynn Toman represented the Motor Maffia Motorsports as the winner of the best overall float, receiving a plaque and a check for $250.

The theme of the 2018 parade was “A Star Spangled Salute” and the Grand Marshall was Colonel Dan Sacachene, 910th Airlift Commander of the Youngstown Air Reserve Station.

Shepas said that when he became chairman of the parade he moved the time from 2 p.m. to noon.

“This way we can all get home and enjoy time with our family and friends sooner, celebrating Independence day,” Shepas said.

He explained that since this change the number of participants has grown to more than 100.

“Our committee is already planning and looking for ways to make this Fourth of July celebration even better,” Shepas said, thanking the Austintown community for coming out to support the event. “I hope we make lasting memories for them and their families.”