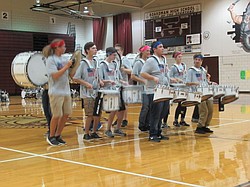 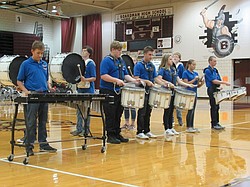 Neighbors | Jessica Harker.Western Reserve drum line was the first group to perform for the Boardman Drum Night at the BHS gymnasium. 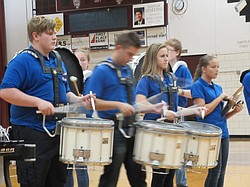 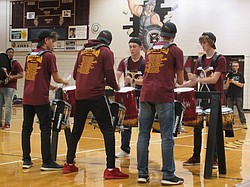 Neighbors | Jessica Harker.Members of the Liberty drum line performed a portion of one song on plastic buckets during Boardmans Drum Night held Oct. 8. 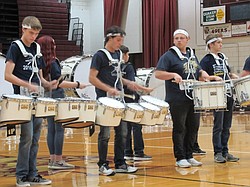 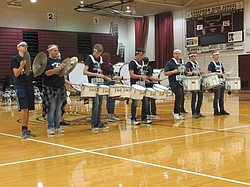 Boardman High School hosted its sixth annual Drum Night on Oct. 8. The Drum Night is an event that features the percussion section of local bands.

“The drum line is so entertaining because they do visual effects,” said Boardman Band Director Thomas Ruggieri.

Seven schools joined Boardman for the night, including Austintown, Liberty, McDonald and the YSU drum line.

“The drum lines are a performing group of their own,” Ruggieri said. “There is a lot to see.”

During the event each schools drum line took turns taking the floor.

They played various sets and each school put a unique spin on the classic drum line.

“Its very diverse and entertaining, they always have choreography and movement with the music,” Ruggieri said.

Many of the schools performed unique choreography.

Liberty drum line performed a portion of their show on plastic buckets.

The Boardman band also took a creative spin, with one member of the drum line being hoisted onto another shoulders and flipping upside down to play a portion of the song.

“They arrange all the music and do the choreography and they rehearse it themselves,” Ruggieri said.

He explained that the Drum Night was inspired by the annual Howland drum line event.

“Its a great way to showcase all the hard work our percussion sections do,” Ruggieri said.

He explained that unlike other drum nights, this show ended in a drum jam where all of the drum lines are brought out to the floor and play a candance they all know.

The show took place in the high school’s gymnasium and was $2 to enter.

The band also had a 50/50 raffle during the event which supported the Boardman band.

“Besides the music, which is great, there’s always a lot to see,” Ruggieri said. “It’s always a good night.”