Fall is the time for a variety of mushrooms 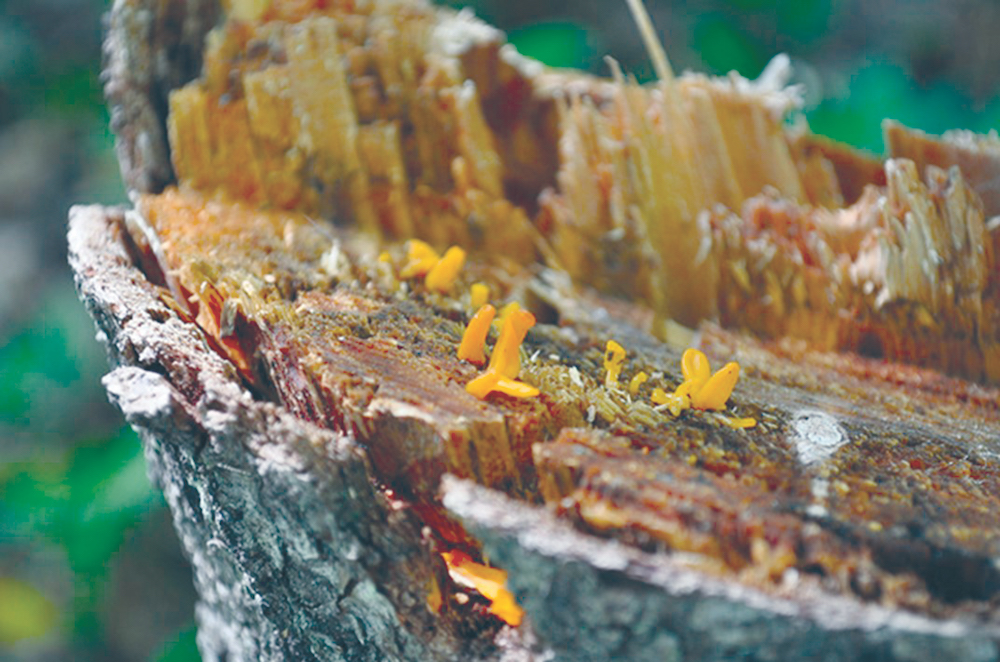 Late summer through fall is a great time to find a variety of mushrooms in our backyards and woods.

Don’t be alarmed to see mushrooms on the garden bed or in the lawn. No mushroom is deadly if handled – just make sure to wash your hands afterward.

But first, what exactly is a mushroom?

Much of a fungus is located below ground and is made up of a network of thread-like branching filaments known as hyphae that are responsible for the absorption and transport of nutrients.

It is estimated there are 5.1 million species of fungi worldwide – a number that far exceeds the number of plants. While most fungi are too small to see without the help of a microscope, thousands of species will produce mushrooms that can be observed.

Many mushrooms are diverse in appearance and a few can be easily identified, but sometimes looks can be deceiving.

Always take a spore print. Many field guides use spore color as an identifier, and you cannot tell spore color by looking at the gills. Spore prints are produced by removing the stalk (called a stipe in some field guides) from the cap and placing the cap down on dark- or light-colored paper and covering with a bowl. I like to have both types of paper on hand.

Other features used for identification with field guides include cap and gill characteristics, stipe placement, smell, size, and color change when bruised.

Features vary greatly depending on the age of the specimen, so it is best if you can collect specimens that range in maturity for identification. It is also important to note the date, location, growth pattern – fairy rings, clusters, scattered, or solitary – and nearby vegetation.

Knowing the surface that a mushroom develops on is key in identification. For example, the gem-studded puffball (Lycoperdon perlatum) grows on soil, but the similar pear-shaped puffball (L. pyriforme) is found on rotting logs.

One of my favorite groups of mushrooms found during this time of year are the corals and jellies. There are many different species of these fungi that serve as decomposers – coral-type Ramaria spp., Auricularia spp. – that include the wood ear jelly, and the bright orange Dacrymyces spp. are just a few that you may run into.

A common coral seen at this time of year is the crown-tipped coral. Although not true corals, carbon antlers and dead man’s fingers (Xylaria spp.), which look like their name suggests, are a neat find as well.

Some finds are not so great, however. Smell something horrible? Check your garden bed for stinkhorns. Stinkhorns are commonly found during this time of year growing in areas with mulch and compost where they feed on organic matter. The smell is not meant for you but for the flies (and other insects) responsible for dispersing the spores.

Most mushrooms don’t smell bad. Just last week I noticed a ring of mushrooms (known as a fairy ring) with caps covered in “warts” around a conifer in a yard. These were likely fly agarics (Amanita muscaria), mycorrhizal fungi that pair with many hardwoods and conifers.

Mycorrhizae are important fungi since they play a key role in nutrient absorption and exchange with trees. Other benefits provided by mycorrhizae include improved defense against plant pathogens and competitive advantages for seedlings in areas shaded by mature trees. Many boletes are also mycorrhizal – you may find the yellow, slimy slippery jack or a king bolete under a conifer in the backyard. A fall favorite is the giant puffball, which can be softball to soccer-ball sized.

Many gardeners wonder if mushrooms will kill plants. It depends, but more often than not the answer is no. Some polypores and gilled mushroom species are considered parasites. For example, the sulfur shelf (Laetiporus spp.), causes brown rot in a variety of trees. Once the tree has died, the fungus continues to break down the dead tissues as a saprobe.

Usually the presence of mushrooms growing on a living tree signals a tree in decline, whether from age, disease or environmental stress and is not caused by the fungus itself.

I can go on and on about what mushrooms you might see around the yard – the aforementioned species are by no means a complete list of what is out there.

If you plan to eat your find, identification is important. There are a lot of white mushrooms out there that look like button and meadow mushrooms but are deadly if consumed. Some mushrooms are edible only at certain stages of maturity. But even if you don’t eat what you find, fungi are valuable assets to have in the garden.

To learn more about wild mushrooms in Ohio, go to http://go.osu.edu/mushrooms.

To learn more about mushrooms in the lawn and characteristics, go to http://go.osu.edu/moremushrooms.