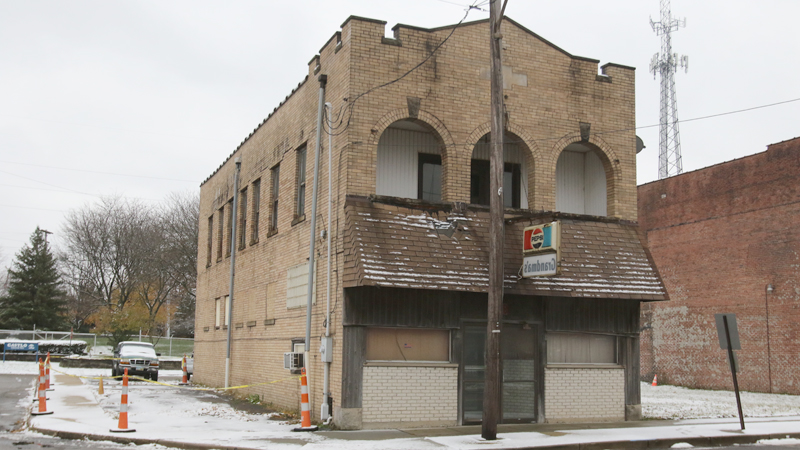 Abandoned, collapsing, and with Ohio Fire Code violations that are “too numerous to list,” a number of buildings in downtown Struthers are in the crosshairs of city administrators hoping to clean up and encourage reinvestment in the area.

Mayor Terry Stocker said the city is trying to spur revitalization in the downtown section of the city by cracking down on several of the properties along South Bridge Street that are in violation of city code.

The city is focused on the structures at 108 S. Bridge St., Eagle Antiques, the former site of Nick’s Department Store and the old Los Gallos building.

Photos taken during the inspection show narrow aisles between shelves filled with second-hand items, exit doors blocked by clutter and what appears to be a clerk’s sitting area surrounded by refuse.

Stocker said the city was made aware of conditions within the building when residents called to complain.

The owner of the business was told to rent dumpsters and clean up the business to bring it into compliance with the city’s fire code.

“So far as I know they never complied with that request,” Stocker said.

More recently, the city sought to execute a search warrant allowing access to the interior of 108 S. Bridge St., which Stocker fears may be a public safety hazard.

“We’re afraid that when the water gets and expands this winter it could be enough to start pushing bricks out onto the streets,” Stocker said.

John Zomoida, the city law director, said the request for a search warrant was ultimately denied by Struthers Municipal Judge Dominic Leone on the grounds there was not sufficient support provided to justify the order.

“We’re trying to do the best we can to both revitalize the downtown and ensure the safety of the residents,” Zomoida said.

Photos from the inspection of Eagle Antiques also include shots of the exterior of 108 S. Bridge St. depicting large cracks in the mortar line near the roof of the building.

Councilman Dallas Bigley, D-at large, acquired the building that was formerly home to Nick’s Department Store at 122 S. Bridge St. earlier this year, but said he’d be willing to donate the structure for demolition if it would help the city’s revitalization efforts.

“I acquired it with plans to rehab it and rent the space out,” Bigley said. “But I definitely don’t want to stand in the way of the city’s progress. If we can tear down these buildings and it will help bring new business into the area, I’m all for it.”

Bigley previously purchased and renovated another iconic downtown Struthers business, the Bowladrome, and reopened it under the name State Street Billards & Bowling.

The building that was formerly home to Los Gallos, the Cellar, Fat E’s and Kelly Pavlik’s 13th Round – 162 S. Bridge St. – is also on the city’s radar for rehabilitation or demolition.

Stocker said while the building isn’t in terrible condition, there hasn’t been any serious inquiry into the structure since Los Gallos closed in November 2013. “We’ve tried to market that building. It’s too bad, there’s so much potential there. There’s a bar on each floor and updated electrical throughout,” Stocker said. “Unfortunately the floor is starting to warp and the exterior aesthetics need work.”

Stocker said he had been in contact with Israel Zambrano, the owner of the Los Gallos restaurants throughout the region, about the building, but no decisions have been made as to its fate as of yet.

Stocker said the city will continue to work through whatever means it can to either bring the buildings up to code or take possession of them.