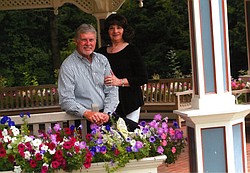 The couple’s son and daughter also gave them a two-night stay in Pittsburgh on their anniversary.

Their children are Amy Wolf of Buffalo, N.Y.; and Brian Wolf of Liberty.

The former Kathy Kanaan and Mr. Wolf were married Aug. 10, 1968, at Immanuel Lutheran Church in Youngstown. They are members of Zion Lutheran Church.

Mrs. Wolf worked in retail for many years before retiring.

Her husband is a retired educator, having taught for 36 years, the last 25 of which were at Poland Seminary High School. He is employed by the Marion G. Resch Foundation and the Alice R. Powers Trust.