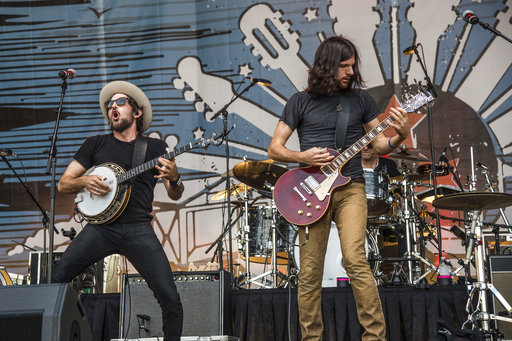 The music festival scene is always in flux.

Sure, there are the mainstays, the Bonnaroos and the Lollapaloozas, that can always be counted on. But every year a few festivals fade away, only to be replaced by new ones.

Joining this year’s list of festivals that you can drive to from Youngstown is InCuya Music Festival in downtown Cleveland.

It’s the story of the year insofar as regional rock festivals go, and for several reasons.

For one thing, it is filling a void in the Rock and Roll Hall of Fame City that has gone on for too long. For another, the lineup is very strong, and not just for a freshman fest.

And finally, one of the three founder-owners is Youngstown-area native Aaron Cornell.

InCuya will take place Aug. 25-26 on the Malls, and surrounding streets, in downtown Cleveland. Headliners will be New Order, the Avett Brothers, SZA and AWOLNATION, with an undercard that boasts the Revivalists, Cake, K. Flay, Earl Sweatshirt and J. Roddy Walston and the Business.

Tickets start at $115 for a weekend pass ($75 for one day) and are on sale now at InCuya.com. The prices will rise as the date nears.

Cornell, a 1994 graduate of Springfield High School and a 1998 grad of Youngstown State University, has spent his career as a chief financial officer for several corporations. But his specialty is starting new companies, and he has a long track record of success.

So how did he get involved in the rock festival game?

Simple: He and his business partners – Stephen McHale and Doug Hester – saw it as another opportunity for a startup. Together they started the Cleveland Concert Co. and got to work.

A rock festival in the Rock and Roll Hall of Fame City seems like a no-brainer that should have happened years ago.

And the seed was planted in the summer of 2015. That’s when Cornell’s friend Steve Lindseth introduced him to Hester.

“[Lindseth] and I started a bunch of companies together,” said Cornell. “His friend Doug, a huge music fan, has this idea. ‘We are the home of the rock and roll hall of fame, and we don’t have a downtown music festival. Let’s figure out how to do one.’ So we had lunch and we hit it off. Steve was coming more from a fundraising perspective, and as an avid music lover myself, I figured why not take a shot at bringing something cool to Cleveland?”

The fact that Cornell and his partners had no idea how to run a music festival was only a temporary obstacle.

“We knew we needed to partner with the right organization to pull it off,” said Cornell. “We talked to national promoters and settled on AEG, which is arguably the world’s No. 1 festival promoter. Cleveland is a Livenation town, and AEG wanted to get into this market. AEG acquired the Agora Theater last year, but before that it had no presence here.”

Cornell – who is hoping to attract up to 25,000 people per day to InCuya – said the viability of a major festival in downtown Cleveland became possible only in recent years. He specifically cites the frenzied buildup to prepare for the 2016 Republican National Convention for making it possible.

“Downtown didn’t have the infrastructure before that,” said Cornell, referring to hotel rooms, green space and other logistical necessities to handle a massive influx of visitors.

Cornell and his Cleveland Concert Co. partners looked into several sites before settling on the Malls.

Edgewater Park was rejected because of traffic and parking shortcomings. Burke Lakefront Airport has daily flights now, so it was ruled out. The West Bank of the Flats, where the Brite Winter festival takes place, also couldn’t handle the crowds and lacked a suitable area for the massive stage.

The Malls of downtown Cleveland are a series of three green spaces. St. Clair Avenue runs between Malls A and B, while Lakeside Avenue separates Malls B and C.

The main stage will be on St. Clair Avenue, facing Mall B. The backstage area will be in Mall A, which will be off-limits to the public. Streets in the Malls area will be closed to vehicular traffic.

The artists for the inaugural InCuya were selected with a goal of achieving musical diversity.

“We wanted it to be all-inclusive,” said Cornell. “Not just rock, not just hop-hop. It is very diverse, and it represents Cleveland. That was our goal, and I think we hit it.”

Several of Cleveland’s top rock bands are on the bill, including Tropidelic, Seafair, Dreamers and the Modern Electric.

A lot of thought also went into the name. Cleveland Concert Co. even hired a firm to come up with a list of them.

It settled on InCuya for a variety of reasons.

“It felt right,” said Cornell. “It rolled off the tongue, it’s easily hashtagable, and it has a little tie-in to Cuyahoga County. It really doesn’t mean anything, but it’s recognizable.”

InCuya ticket sales have been on pace with AEG’s projections, said Cornell. If the freshman event is a success, Cornell said the festival’s footprint could expand in the future to Public Square, Voinovich Park or in other directions.