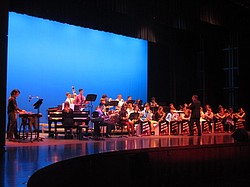 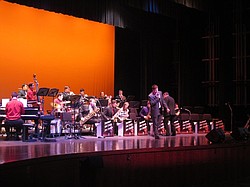 Neighbors | Zack Shively.Jazz ensemble 2 played "Cantaloupe Man," "One Bad Stud," "Nardis," "Sack of Woe" and "Blues in the Closet." Pictured, the band performed "One Bad Stud" by the Blazers from the movie "Streets of Fire." 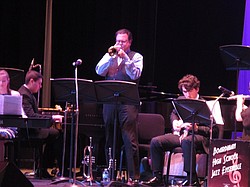 Neighbors | Zack Shively.The BHS Jazz Fest has a guest performer each year. They invited Roger Ingram to perform with the ensembles this year. He has performed with numerous artists, such as Harry Connick Jr. Pictured, he played "T.J.'s Boogie" with the jazz ensemble 3. 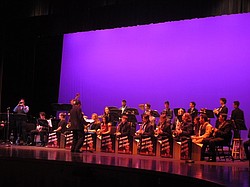 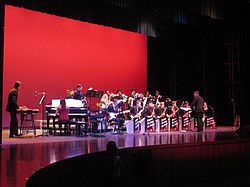 Neighbors | Zack Shively.The jazz ensemble 1 played a long set to finish the concert. They performed jazz standards like "Autumn in New York," a jazz version of the clssical song "Pavane" and their own arrangement of Nirvana's "Smells Like Teen Spirit." Pictured, the ensemble opened with music from the movie "Whiplash."

The program for the event included the songs to be performed, a history of Ingram and future jazz performances.

Ingram has toured and recorded with artists such as Ray Charles, Louis Bellson and Quincy Jones. He has recorded 19 albums with Harry Connick Jr. and performed in more than 20 Broadway productions. He is a complete musician but is most well-known for his ability to hit high notes.

Ruggieri and the jazz band played with the Buddy Rich Big Band at Powers Auditorium a couple years ago. Ingram had been touring with the big band at the time. Ruggieri, impressed by Ingram’s performance, invited him to be the guest performer for their jazz festival.

The performance began with the eighth grade jazz band at 6:30 p.m. They performed Joe Zawinul’s “Baby That’s What I Need (Walk Tall)” and Jimmy Forrest’s “Night Train.” The group only meets once a week to practice.

The jazz ensemble 3 took the stage at 7 p.m. with the opening tune of “Perdido” by Juan Tizol. Ingram joined the high school students for Jeff Taylor’s “T.J.’s Boogie” and the Tom Kubis arrangement of music from Disney’s animated movie “Beauty and the Beast” written by Howard Ashman and Alan Menken.

Ingram played with each of the high school jazz ensembles.

The jazz ensemble 2 began their set with “Cantaloupe Island” by Herbie Hancock. They added vocals to their performance for “One Bad Stud,” a song by The Blasters from the movie “Streets of Fire.” Then, they played “Nardis” by Miles Davis and “Sack of Woe” by Julian Adderley. They closed their performance with Oscar Pettiford’s “Blues in the Closet.”

The jazz ensemble 1 finished out the concert. Their set began with music from the film “Whiplash” arranged by Erik Morales and originally scored by Hank Levy. They followed the song up with Wayne Shorter’s “One by One.”

In their set, they played jazz standards “On the Sunny Side of the Street“ by Jimmy McHugh and Dorothy Fields and “Autumn in New York“ by Vernon Duke, as well as Oliver Nelson’s “Hoe-Down“ and Tom Garland’s “Then One Day I Had the Blues.”

They also played a jazz rendition of Gabriel Faure’s classical piece “Pavane” and Nirvana’s “Smells Like Teen Spirit.” The finished their set with “How Do You Keep the Music Playing?” from the film “Best Friends” and “Oleo” by Sonny Rollins.

The bands’ future events include the Boardman Relay For Life, their spring jazz concert and the 2k18 Rock Show at Boardman Park at the end of the year. The ensemble will continue into the summer with a series of concerts, including one at Boardman Park on June 21.