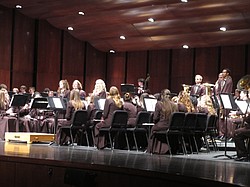 Neighbors | Zack Shively.The Boardman bands had their annual spring concert on May 2 in the Boardman Performing Arts Center. The night was the last night many of the students would perform with these groups. Pictured, the senior students in the symphonic band stood to be recognized during the concert. 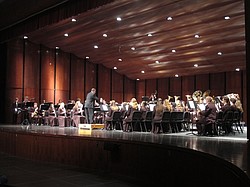 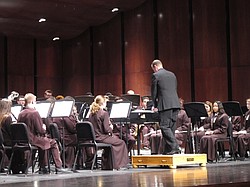 Neighbors | Zack Shively.The band charged a small fee for the concert. The Boardman Band and Orchestra Parents also had a 50/50 raffle. The funds raised through the event went to the students' future expenses, such as making their annual band trip more affordable. 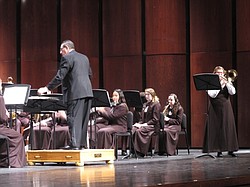 Neighbors | Zack Shively.Thomas Ruggieri decided to showcase the talents of senior trombone player Emma Knickerbocker. She performed a solo on "Concerto for Trombone and Band" by Nikolai Rimsky-Korsakov. She has performed with the wind ensemble, marching band and jazz bands for all four years of high school. 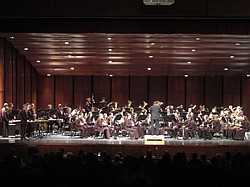 The Boardman Performing Arts Center hosted the annual Spring Concert of the Boardman Bands on May 2.

The symphonic band and wind ensemble performed at the event. Michael Shevock, Timothy Tuite and Thomas Ruggieri directed the bands. They played a number of classical pieces and ended both of their sets with music from a children’s song.

The symphonic band began their set with Frank Ticheli’s “Joy Revisited.” They also played “Mighty Might” by Ted Mesang and arranged by Sean O’Laughlin and “Nettleton” by Johnnie Vinson. The ended their performance with music from “The Little Mermaid,” a piece composed by Howard Ashman and Alan Menken and arranged by Jay Bocook.

The wind ensemble followed the group with Rossano Gallante’s “The Redwoods” and Calvin Custer’s “La Virgen de la Macarena.” The latter of the two was a song about the Virgin Mary. They also played Morten Lauridsen’s “O Magnum Mysterium,” which Robert Reynolds arranged.

Ruggieri selected a piece to showcase the talents of senior Emma Knickerbocker. She has been with the ensemble, marching band and jazz bands for her full high school career, which culminated in her solo performance on Nikolai Rimsky-Korsakov’s “Concerto for Trombone and Band.” She played a difficult concerto on trombone with the backing of the wind ensemble.

The group ended the night with music from the Pixar film, “The Incredibles.” Members from the symphonic band joined the ensemble to play as a larger group. The performance comes ahead of the release of Pixar’s “The Incredibles 2” in the summer.

Each attendee paid a small fee to watch the bands perform. The Boardman Band and Orchestra Parents also had a 50/50 raffle. The money went back to the band to help pay for future expenses, such as their annual band trip.

Boardman bands had other performances from the drumline at Relay For Life on May 18, their jazz bands at the Spring Jazz Concert in the BPAC on June 1 and an end-of-the-year rock show celebration at Boardman Park on June 5.