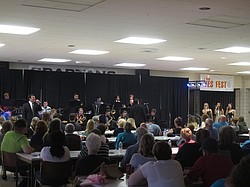 Neighbors | Zack Shively.The jazz ensemble 2 closed out their set with director Thomas Ruggieri's arrangement of "With a Little Help From My Friends," based on Joe Cocker's performance at Woodstock. Ruggieri originally arranged the piece for the marching band, but he gave it to the jazz ensemble to play as well. Pictured, the band performed the song while Patrick Kale sang with Randi Baghurst, Dani Girardi and Desi Girardi backing him up. 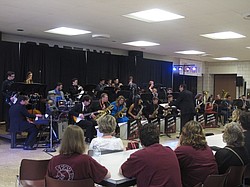 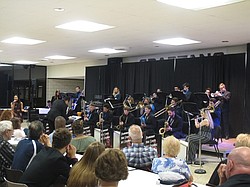 Neighbors | Zack Shively.Boardman's jazz ensemble 1 opened and closed the spring jazz concert with sets of five songs. Their songs from the night included music from everyone from Michael Buble to Dizzy Gillespie to Kermit the Frog. Pictured, they ended the concert with a medley of Stevie Wonder songs with Becca Choleva on vocals. 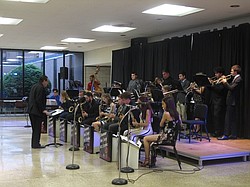 Neighbors | Zack Shively.Boardman's jazz ensemble 2 performed third on the night. They played popular jazz songs, such as "Four" by Miles Davis and "Soulful Strut" written by Eugene Record and Sonny Sanders, as well as popular music from other genres, such as the song pictured, "The Fool on the Hill" by the Beatles. 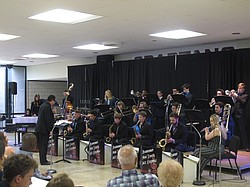 Neighbors | Zack Shively.The Boardman High School jazz program ended the school year with their spring jazz concert on June 1 in the high school cafeteria. The venue allowed a closer experience for the audience than the BPAC does. Pictured, jazz ensemble 1 performed "(It's Just) Talk" by the Pat Metheny Group during the opening set of the show.

The Boardman High School jazz ensembles performed in the school’s cafeteria on June 1 for their spring jazz concert.

Thomas Ruggieri directed the three ensembles that performed during the night. They played both jazz standards and popular songs from other genres.

Ruggieri said that he wanted to try out the new venue as opposed to the Boardman Performing Arts Center. The band put up a black curtain behind them to organize the bands quickly between the performances. The cafeteria allowed for a more intimate experience, as the group was much closer to the audience. The cafeteria also allowed for food and drinks during the concert.

The jazz ensemble 1 opened and closed the concert. They played a set of five songs to open the concert, beginning with Oliver Nelson’s “Groove.” They then played the Pat Metheny Group’s “(It’s Just) Talk,” which featured four solos from different students in the band. Senior Patrick Kale, who celebrated his birthday at the concert, sang the following song, “Cry Me a River” by Michael Bubl .

Fellow senior Becca Choleva performed the vocals on the next song, “Too Close for Comfort” by Gordon Goodwin, an artist Ruggieri always adds to the jazz ensemble’s set list ever since they opened for Goodwin’s Big Phat Band years ago. Ruggieri said the group also has a long history with Tower of Power’s music, as they closed their first set with the group’s song “Diggin’ on James Brown.”

The jazz ensemble 3, a volunteer group that does not spend any time playing together during school, followed their performance with a three song set, starting with Goodwin’s “The Jazz Police.” They then played “Mr. Magic” by Grover Washington Jr. and finished with “The Mudbug Strut” by Paul Baker, which had solos from eleven students.

Jazz ensemble 2 took the stage afterward to play five songs. They began with “Four” by Miles Davis, then went into “The Fool on the Hill” by the Beatles. They also played “Soulful Strut,” written by Eugene Record and Sonny Sanders and “I Found a New Baby” by Jack Palmer and Spencer Williams.

The ensemble closed out their set with another song from the Beatles’ John Lennon and Paul McCartney: “With a Little Help From My Friends.” Ruggieri arranged the song based on Joe Cocker’s version of the song performed at Woodstock for the marching band’s Summer of Love theme earlier in the year. He passed the music onto the ensemble, where Kale did his best Cocker impression, while Randi Baghurst, Dani Girardi and Desi Girardi backed his vocals up.

Jazz ensemble 1 returned to close out the concert. They began with another song that featured eleven soloists, “Freedom Jazz Dance” by Eddie Harris. Senior trombone player Emma Knickerbocker had her own solo on Joe Raposo’s “Bein’ Green,” a song made famous by Jim Henson and Kermit the Frog.

Trumpet player Miles Spearman then got his chance to display his Dizzy Gillespie solo on “Salt Peanuts.” They then played the jazz standard “One Mint Julep,” written by Rudolph Toombs. They closed the concert with a medley of Stevie Wonder songs, featuring Choleva and Emily Garrett on vocals.

Despite the school year coming to an end on May 31, the band still has a number of performances for the summer season, including a concert in Boardman Park on June 21, a set at the Rock and Roll Hall of Fame on July 23 and a performance at Columbiana Firestone Park on July 29.