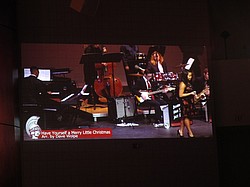 Neighbors | Zack Shively.Boardman Spartan Television Network broadcasted the concert on the side of the wall in the performing arts center. BSTN recorded the concert and will sell a DVD of the performance. 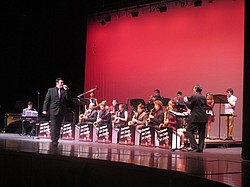 Neighbors | Zack Shively.Jazz Ensemble 2 played five songs, including a Christmas medley called "Have a Cool Yule!" Pictured, the band performs "Burnin' Down the House" By Talking Heads with Patrick Kale singing. The arragement was based on David Byrne and St. Vincent's version of the song. 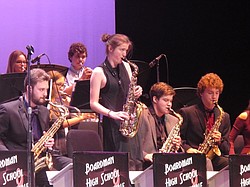 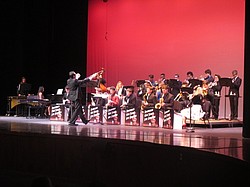 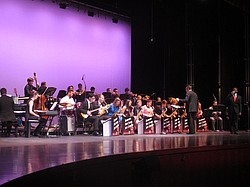 Neighbors | Zack Shively.The Jazz Ensemble 3 played three songs. The group, unlike the other ensembles, practice voluntarily outside of school hours. Pictured, the band performed a rendition of James Taylor's "How Sweet It Is (to Be Loved By You)" with James Jama singing the song.

Director Thomas Ruggieri led each of the ensembles and spoke to the audience between the performances. He had the bands play jazz classics, pop tunes and holiday songs. The concert was originally scheduled for Dec. 13, but the weather caused Ruggieri and the school to reschedule the show.

The curtain opened to Jazz Ensemble 1 playing “Dancing Men“ by John LaBarbera. After the song, Ruggieri welcomed everyone to the concert. The band performed four songs as a part of their opening set. Their set comprised of three jazz songs, such as Bret Zvacek’s “702 Shuffle,“ and a single holiday song: LaBarbera’s arrangement of Leroy Anderson’s “Sleigh Ride.“

Jazz Ensemble 3 played a three song set. The set included James Taylor’s “How Sweet It Is (To Be Loved by You),“ which featured a vocal performance by James Jama. The band did not play a holiday song, but instead performed arrangements of two other popular songs, Clifford Brown’s “The Blues Walk“ and Stevie Wonder’s “Faith.“

Unlike the other two jazz bands, ensemble 3 is not part of a class. The students volunteer their time to be a part of the band.

Herbie Hancock’s “Watermelon Man“ kicked off Jazz Ensemble 2’s group of songs. They also performed arrangements of popular songs, like a rendition of “Burnin’ Down the House“ by Talking Heads that featured Patrick Kale on vocals. They did play a medley of Christmas songs arranged by Mike Lewis called “Have a Cool Yule!“

Jazz Ensemble 1 closed out the night with a four song performance that included two holiday songs and two popular jazz songs. Their opening of their second set began with “Soul with a Capital ‘S‘“ by Tower of Power. They played “Have Yourself a Merry Little Christmas“ and closer “Jingle Bell Rock“ for the holidays. Their show also included Michael Bubl ’s “Feelin’ Good.“

Boardman Spartan Television Network broadcasted the performance onto the wall of the Boardman Performing Arts Center. They had multiple cameras and switched between them for the best angles. They showed song details on their video at the beginning of each song. The audience could buy a DVD of the performance.

Ruggieri had notes between the sets while the next band set up. He spoke about the band’s accomplishments. The band has played in jazz clubs and at Rock and Roll Hall of Fame in Cleveland. They opened for Buddy Rich Big Band in 2016.

He also spoke about former alumni, including Anthony LaMarca. Jazz Ensemble 2’s version of “Burnin’ Down the House“ was arranged by Ruggieri to sound like David Byrne and St. Vincent’s version of the song. After the song, he talked about LaMarca’s tenure touring with St. Vincent.

He also spoke about LaMarca’s band, The War on Drugs. The band’s newest album, “A Deeper Understanding,“ recently won a Grammy Award for Best Rock Album.

He reminded the audience of Boardman School’s 100th Anniversary Celebration of Arts and Music on Jan. 20, which will include free performances from the art, music and drama departments. The event will be free to the community and have a Disney theme.