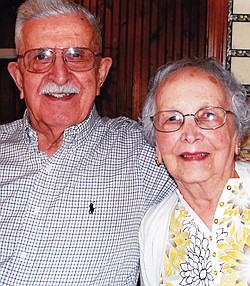 Michael and Irene Starr celebrated their 70th wedding anniversary by sharing a private celebration with family at home.

Mr. Starr and the former Irene Faddock were married Feb. 7, 1948, at Holy Trinity Church in Youngstown.

Mr. Starr was a mechanical engineer employed at several area engineering firms. He served in the U.S. Navy in Hawaii and was stationed at Pearl Harbor during World War II. He also served during the Korean War.

Mrs. Starr was a homemaker.