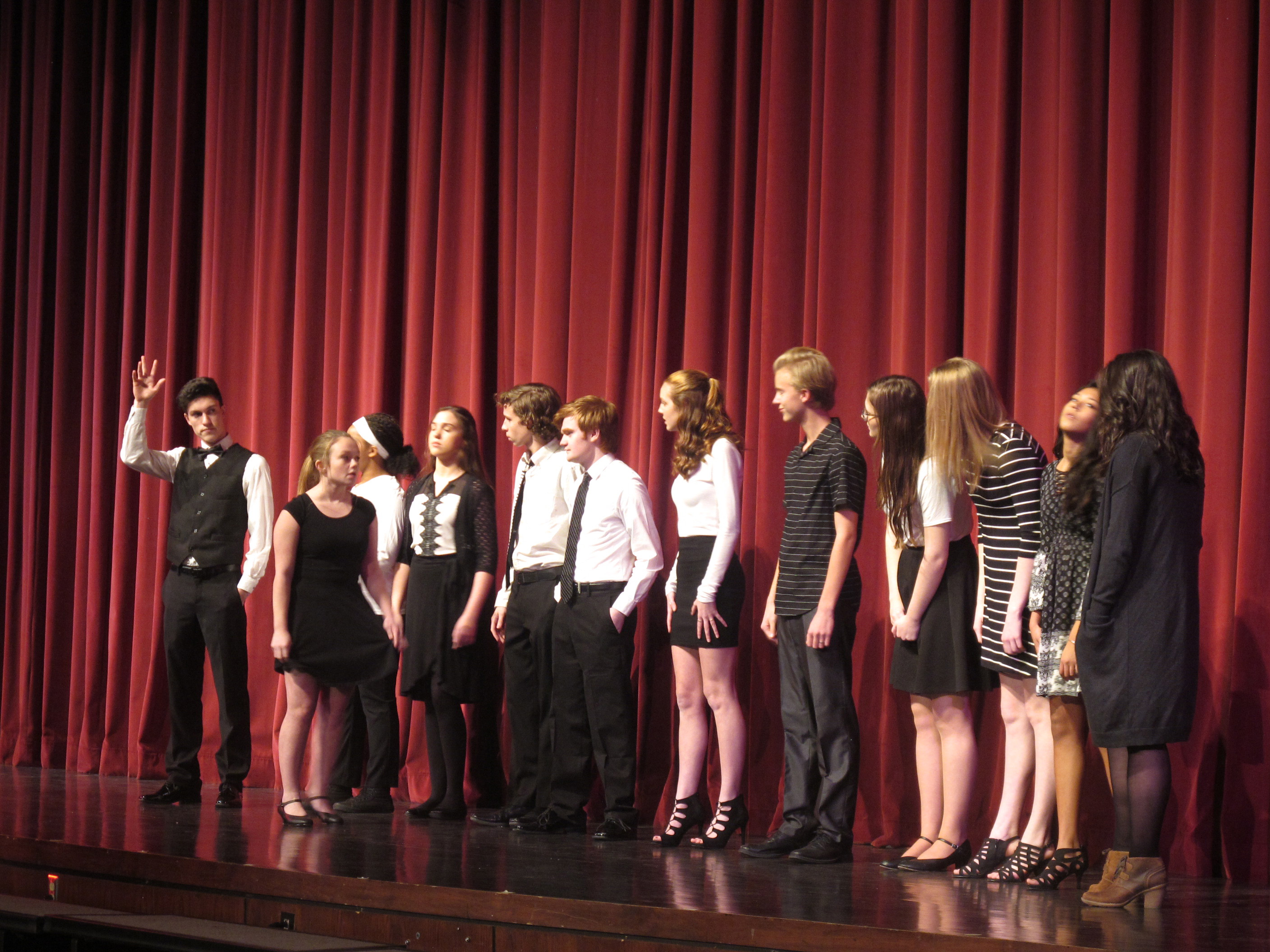 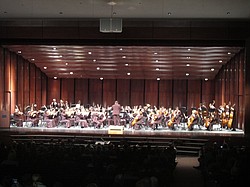 Neighbors | Zack Shively.The symphonic orchestra closed the arts festival at Boardman High School. They played several songs, including their opener "When You Wish Upon a Star." 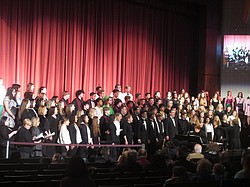 Neighbors | Zack Shively.The Boardman high school choir sang with alumni during the school's Arts and Music Celebration on Jan. 20. They sang a number of songs including "The First Noel" and the school's alma mater. 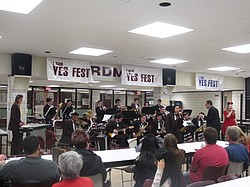 Neighbors | Zack Shively.The jazz band performed in the cafeteria during the intermission of the celebration in the BPAC. The cafeteria also had visual arts from students in all grades from the Boardman schools. 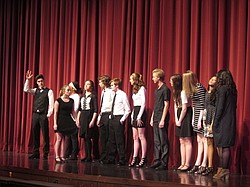 Neighbors | Zack Shively.The drama clubs performed in the BPAC during Boardman's arts celebration. The performances included a song from the fall musical "The Wedding Singer," a preview of the spring play "12 Angry Jurors" and "Arabian Nights" the junior high school's production of "Aladdin Jr." Pictured, a juror demonstrated his opposition in "12 Angry Jurors." 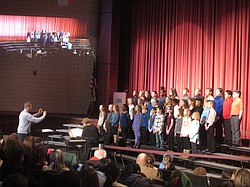 Neighbors | Zack Shively.Boardman schools celebrated their 100th anniversay with a special event centered around their arts program on Jan. 20 at the high school. Pictured, a choir consisting of students from the four elementary schools performed under the direction of Robert Pavalko.

Boardman Schools continued their 100th anniversary celebration on Jan. 20 with a night dedicated to the art programs throughout the district at Boardman High School.

The special event showcased the strides of the visual, dramatic and music art programs throughout all of Boardman schools. The night highlighted both student and alumni work.

“Our arts program is the easiest thing to talk about,“ said Boardman Superintendent Timothy Saxton. He said they have the best program in the state in terms of both quality and range of art programs offered at the school. He also explained that the Grammy’s designated the school’s music program as a Grammy Signature School in 2007.

For the first hour, attendees walked around the cafeteria and the Boardman Performing Arts Center where the school displayed artwork from current and former students. The cafeteria had a number of artwork displays from all of the schools.

These displays included a wall display in the cafeteria that showcased the work of kindergarten through fourth-grade students from all four elementary schools. The BPAC had artwork from alumni, including graphic designs and paintings.

The night had a Disney theme. Saxton said this was to attract all members of the family and get the younger children excited for the night. The school set up cut outs of Disney princesses in the hallway between the BPAC and the cafeteria. The musical selections also followed the theme.

The first set of musical arts began in the BPAC at 6 p.m. Former graduate and school board member Mark Huberman, the night’s master of ceremonies, welcomed the audience to the school’s celebration.

A select group of students from the four elementary schools performed first under the direction of Robert Pavalko. They sang “How Far I’ll Go“ from the film “Moana” and “Let it Go“ from “Frozen.“

The high school wind ensemble performed next with a medley of songs from “The Lion King,“ including “Circle of Life“ and “I Just Can’t Wait to Be King.“ Thomas Ruggieri directed the band.

The choir performed following the band. First, the Boardman Singers, an all-female choir, sang “Do You Want To Build a Snowman?“ from “Frozen“ and “I’ll Make a Man Out of You“ from “Mulan.“ The men’s choir joined them on stage to make a full choir for the song “When You Wish Upon A Star,“ from the 1940 film “Pinocchio.“

They finished the first half of the evening with a singing of the “Boardman High School Alma Mater,“ which the audience joined in for, filling the BPAC with the sounds of hundreds singing.

Huberman broke the performances after the alma mater for a brief intermission. The school had a concession stand in the cafeteria for the break.

The high school jazz ensemble, also directed by Ruggieri, greeted the attendees in the cafeteria where they ate, looked at the visual arts and watched the band play. The band performed a set of songs that included and Stevie Wonder’s “Don’t You Worry ‘bout a Thing“ and Tower of Power’s “Soul with a Capital S.“

After the intermission, Huberman welcomed everyone back to the BPAC. He started the second half of the program by talking about some former alumni. He then brought former superintedents Dick Selby and Larry Saxton as well as current superintendent Timothy Saxton and Boardman High School principal Cynthia Fernback to the stage. Huberman commended Larry Saxton on his vision and planning of the BPAC, which has influenced their arts program immensely.

“I sat in those hard seats over at Center Middle School for 25 years, and I swore that if I became superintendent, I was going to have seats with cushions,“ Saxton joked. He continued to compliment the performing arts at the school and the Boardman community.

Huberman recognized members of the school board and community members that helped raise money for the BPAC. He also thanked retired art teacher Carl Rubino for his help in building the art program in the district.

He finished the recognition portion by introducing Lewis Anderson, a 93-year-old graduate from the class of 1942. Anderson commemorated his alma mater by playing “Happy Birthday To You” for the school’s anniversary on his pocket trumpet.

Following the recognition of alumni and former administrators, the drama clubs performed. To begin, two students from the high school’s fall musical “The Wedding Singer“ sang “Grow Old With You“ from the show. The high school group then performed a preview of their spring play, “12 Angry Jurors,“ based on the teleplay and film “12 Angry Men.“

Glenwood Junior High School’s drama club finished the dramatic arts portion of the night with “Arabian Nights“ from their upcoming performance of “Aladdin Jr.“ The musical is based on Disney’s “Aladdin,“ but it has been changed for a middle school group.

The Boardman Symphonic Orchestra ended the night with a number of songs, including “When You Wish Upon A Star“ and “It’s a Small World After All.“ Michele Prokop, Bill Amendol and Joel Monoco directed the group. They finished the performance with a medley of songs from “Pirates of the Caribbean.“

Boardman Schools Television Network recorded the night and had an on-going transmission on the walls of the BPAC. They streamed the footage live on their YouTube page, where the video of the night can still be accessed.

The event was just one of four celebrations the school has had to commemorate their 100 year anniversary. In the summer, the school hosted a family night. They had a pep rally honoring their athletics program in September. They plan to dedicate a full week in May to celebrate their academics.