Stadium Drive thanks Veterans with breakfast 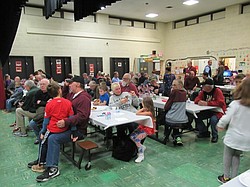 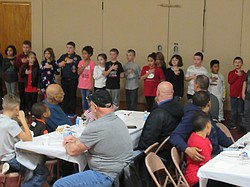 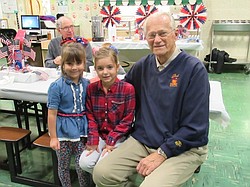 Neighbors | Jessica Harker.Gabriella and Gianna Costas sat with their great-grandfather, John Mulichak, during Boardman Stadium Drive's Veterans Breakfast, standing in for the girls' father, who is currently serving overseas. 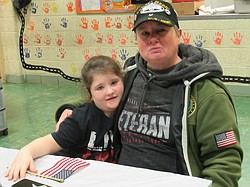 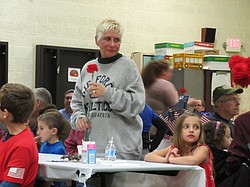 Neighbors | Jessica Harker.Veterans stood to be honored and were handed carnations at the Stadium Drive annual Veterans Day event on Nov. 9 at Stadium Drive Elementary School. 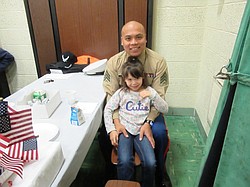 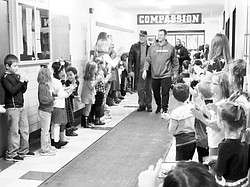 Stadium Drive Elementary School in Boardman hosted its annual Veterans Day Breakfast on Nov. 9. According to Communication Coordinator Amy Radinovic, the breakfast has been a long standing tradition.

“We have a lot of veterans that come every year, along with new faces with all the new students, its a great event,” Radinovic said.

During the event, Veterans and students were served doughnuts, coffee and milk while they watched each class perform.

Radinovic said that each year teachers are given the opportunity to choose what kind of performance their students will put on for the Veterans. This year, many sung songs, including “God Bless America” and “The Star Spangled Banner” and passed out carnations to veterans. One hundred and ten people were in attendance at the event, including students and Veterans in their families.

One example was Gabriella and Gianna Costas, students at Stadium Drive who attended the event with their great grandfather and retired service man, John Mulichak. Mulichak said that he was attending the event in place of his great grand daughter’s father, who was currently serving in Afghanistan.

“I love coming to Veterans Day events like this, and I know their dad will too as soon as he gets back,” Mulichak said.

After the event students and teachers lined the hallways to clap as the Veterans exited the building.

“It’s something that everyone can get excited about, taking the time to thank the Veterans that are the reason we are here today,” Radinovic said.