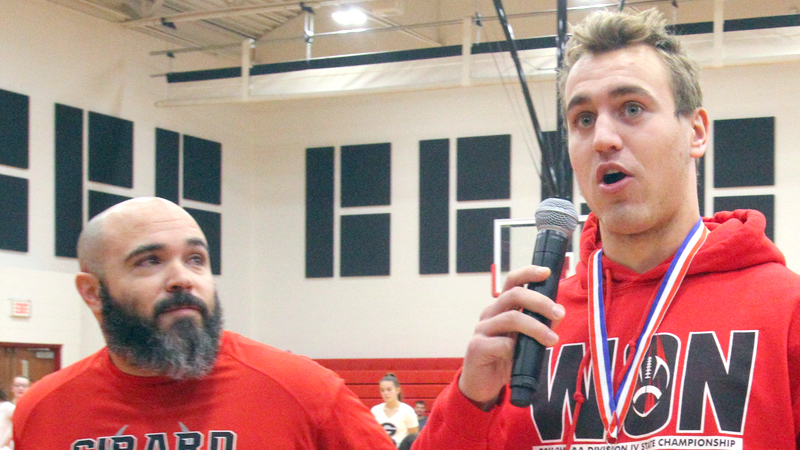 The Girard Football team was honored during a ceremony Thursday Dec. 6, 2018 at the school for being 2018 state runner up champions in football. 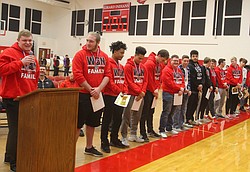 The Girard football team was honored today for being state runners up.

Pat Pearson, head coach of the Girard Indians, exuded pride as he told the football team it has “transformed this community forever.”

“We’ve reached our final destination. You’ve reached your full potential,” he said. “You’ll be heroes of this town forever. Nobody will ever forget what you guys did for our community.”

“There was an explosion of school spirit we’ve never seen before,” said William Ryser, high school principal, reflecting on the days leading up to the championship.

The school celebrated with an assembly Thursday morning, to honor everyone involved in the team’s journey.

Just as they did Friday nights on the football field, the students cheered wildly for the team and the marching band energized the crowd. Coaches, school officials and Mayor James Melfi attended the assembly in the Girard High School gym.

“What a ride this has been,” said David Cappuzzello, school superintendent.

Each football player was recognized and received a medal.

Mark Waid, the school’s star quarterback, said it was an emotional season. He thanked the team’s supporters for being there “through thick and thin.”

After the football and cheerleading teams were honored, everybody in the gym sang the school’s alma mater.

The crowd and the teams swayed back and forth as they sang, with their arms around each other’s backs, unified in their school spirit.

Cheerleader Joey Cario said her team has cheered alongside the football team since middle school. Now she, along with some of the other football and cheerleading members, are finishing their senior year.

“It’s no surprise they made it all the way,” she said. “We are all proud of these boys.”

The accomplishments the team made still feels unreal, and it’s “something we will always remember,” she said.

Senior Samantha Dohy cheered with fellow students at all the football games, and she said the season was incredible for them to watch. On the drive to the state championship in Canton, “I had so much adrenaline; we were all really excited,” she said.

“I wouldn’t want to cheer for any other team,” she added.

For Pearson, the motto “One team, one town and one family” rings true. Turning to his football team, he ended his speech by saying, “I love you guys for life.”