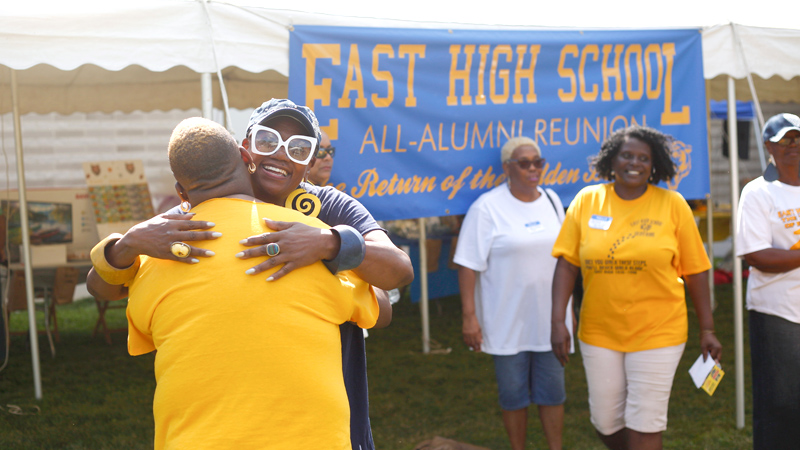 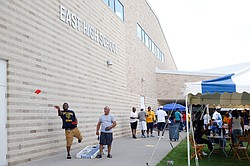 “Once a Golden Bear, always a Golden Bear” was the mantra repeated over and over at Saturday’s East High School alumni reunion on the school grounds.

The event was as much a homecoming as a reunion as people wearing their gold and blue East High School shirts from several eras hugged and shook hands with people they may see every Sunday in church or in the neighborhood, or with high school friends they hadn’t seen in years.

The event, organized by the Youngstown East Alumni Association, was also a celebration of the one-year anniversary of the return of the school’s Golden Bear mascot.

When the city schools merged, it caused a disconnect between the school and community, said John Jemison, president of the Alumni Association. One contributor to that separation was the school’s changing the long-standing Golden Bear mascot in the early 2000s to a Panther.

When Youngstown schools CEO Krish Mohip decided in August 2017 to bring the Golden Bear mascot back, it reinvigorated the East High Alumni Association and community support for the school, said Jemison, a 1967 graduate.

“A beacon of hope has been elevated in the school and community. Our efforts are to draw the community together to support our children. We must always put our children first,” Jemison said.

The event, open to the community, included music, food, kids’ activities, a demonstration by the East High cheerleaders, and a program honoring student accomplishments and commemorating the anniversary.

“It’s nice to get back to our identity. Every school wants to maintain its history and culture and traditions,” said the Rev. Kenneth Simon, a 1973 East graduate, wearing a Golden Bears hat while sitting around a table talking with friends.

Among them was Sybil West, Class of 1964; Jackie Burley, Class of 1962; and Cortland Casey, Class of 1970, who were among those who fought to keep the East High name and are glad “Golden Bears” is back.

“The East Side is not bad. We have as much pride in our side of town as anybody else does in their part of the city,” said West.

“This is awesome. The main thing is the return of the Golden Bear mascot. It brought the community back to life,” said Casey, who was No. 75 when he played defensive end and offensive tackle on the football team.

James Pack, Class of 1972, and his wife, Annette, a graduate of The Rayen School and former teaching assistant at East High, found a place in the shade to enjoy the day.

“I’m here because friends asked me to come. There is a lot of pride here in the school and community,” said James.

A couple of Class of ‘76 friends, Ramona (Stredrick) Parker and Annette Rozenblad reminisced and sang the alma mater and talked about what East High School and the Golden Bear mascot meant and means to them.

Parker, an East marching band majorette and a self-described “Golden Bear forever,” said the reunion “is fun getting together and seeing faces we haven’t seen in years. It’s a beautiful thing.”

“The East Side has always had a lot of pride,” said Rozenblad. “We supported all the teams,” including track, in which her brother, James Rozenblad, Class of 1973, ran the 880 in 1:59.9, a school record she said has stood for 45 years.

“The value of the revival of the reunion is bringing everybody back together to celebrate our past and our future,” said the Rev. Willie Peterson, Class of 1970 and band drum major.

“We want the students and teachers and administration to know we support them ,and they need us too,” said the Rev. Mr. Peterson, pastor of the New Birth Church and executive director of the Rockford Village Community Center.

“It was very important to get the East High School and Golden Bear mascot back. We fought very hard for that,” said Debra Jones, Class of 1971. “I think East is the best school in the world, then and now,” she said.