Austintown celebrates the Fourth of July 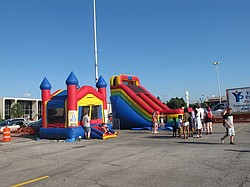 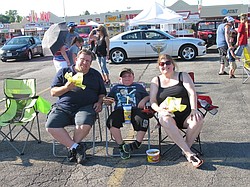 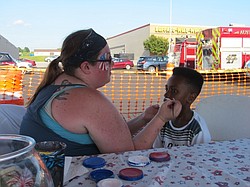 Neighbors | Jessica Harker.Jeremiah Currie got his face painted by a volunteer at the July 1 Austintown Fourth of July event. 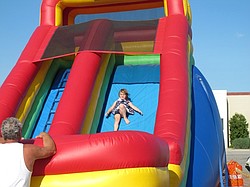 Neighbors | Jessica Harker.Madison Kovacs, age 8, slid down one of the bounce houses set up during the July 1 Austintown fireworks event in the Austintown plaza. 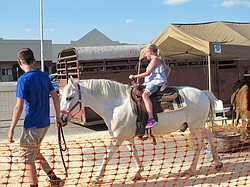 Neighbors | Jessica Harker.Angela Pflug rode one of the horses brought to the plaza by Pony Tails July 1 for the Austintown Fourth of July event. 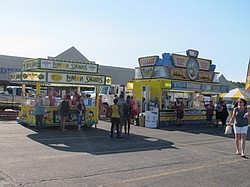 Austintown Township hosted its annual Fourth of July celebration on July 1 at the Austintown Plaza.

The event had a variety of entertainment available for people of all ages and was free to attend.

One piece of entertainment included pony rides put on by Pony Tails.

“The pony’s are my favorite part,” said Angela Pflug who attended the event.

There was also a balloon darts game and face painting available free for children.

The event had a variety of vendors and food trucks with concessions for purchase.

The Austintown Fire Department and police force were present at the event, setting up a display of fire and police vehicles for the public to look at.

The fire department also hung a large American flag in the center of the plaza throughout the event.

Local bands also played a concert throughout the event.

“The food is great, the music is fun and we always come to see the fireworks,” said Ron Moore, who attended the event with his wife and their grandson.

Once it was dark, a fireworks display was put on in the field behind the plaza.

The event was sponsored by Hollywood Gaming.

Donations were taken at the entrance to the event to benefit the Austintown High School swim team.