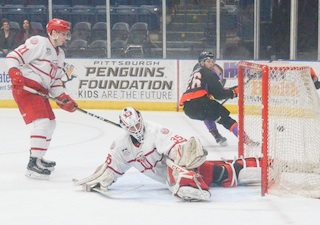 The Youngstown Phantoms faced off against the Dubuque Fighting Saints at the Covelli Centre in game two of the USHL playoff series on Saturday April 21, 2018. Photos by Scott R. Williams - The Vindicator

Throughout Saturday’s Game 2, the Youngstown Phantoms were playing with fire in regards to the Dubuque Fighting Saints’ power play.

But it was Matthew Barry, the Phantoms’ top scorer in the regular season, who burnt the Saints, scoring a key shorthanded goal as the Phantoms rallied for a 3-2 victory at Covelli Centre.

Late in the second period, the Phantoms trailed 2-1 when Samuel Salonen was whistled for high sticking. The Saints, trailing the best-of-five Clark Cup playoff series 1-0, were poised to grab a two-goal lead and maybe steal home ice.

Instead, Barry torched them after stealing the puck on an Alex Steeves’ pass outside the Saints’ blue line.

“A lot is going [through your mind], but you’ve got to remember to calm down, slow down, make sure you get a good shot,” Barry said of the open-ice opportunity.

Barry closed in on Saints goaltender Cole Weaver and faked a shot.

“I pulled it back and then shot it glove-side,” Barry said.

Barry’s goal tied the game, setting up a tense third period that began with the Phantoms killing another power play.

Then with 5:20 remaining, Curtis Hall found Salonen alone in the slot.

“It was a really good pass from Hall,” said Salonen of his first goal in almost two months. “I was trying to go high blocker but it went just over the blocker.”

The win gives the Phantoms a stranglehold on the series, but the next two games will be in Dubuque on Tuesday and, if necessary, Wednesday. The winner will advance to the USHL’s Eastern Conference Finals against Team USA’s 17-U squad or the Chicago Steel.

“It’s huge, especially going back to their barn,” Barry said of the 2-0 lead. “They are going to be excited to play, but if we jump on them early Tuesday night, they might fold easily.”

Goaltender Ivan Prosvetov was easily the Phantoms’ best player during the first half of the game. In the first period, he stopped 13 shots. Two of them came within seconds. After stopping Quinn Preston’s shot from just outside the crease, Prosvetov stuffed Scott Corbett’s attempt on the rebound.

“We were lucky in the first period to come out [in a scoreless tie],” Phantoms coach Brad Patterson said. “A big credit of that is Ivan.”

Not long after Salonen’s goal, the Saints nearly tied the game, ringing the puck off the goalpost to Prosvetov’s left. The 6-foot-5 goaltender from Moscow stretched out his glove to cover the rebound. In all, he made 30 saves for his second playoff win.

“They have a great unit and they got some good looks, and it’s about limiting those,” Patterson said. “The guys did a good job of that.”

Steeves and Dalton Hunter, who played one game for the Phantoms last fall before being released, scored for the Saints.

Chase Gresock set up Hall for the Phantoms’ first goal when he pounced on a loose puck behind the Saints’ goal and snapped a pass to a streaking Hall, who fired it past Weaver.

The Phantoms will travel to Iowa tonight and practice there on Monday.

If necessary, Game 5 would be at Covelli Centre on April 29.