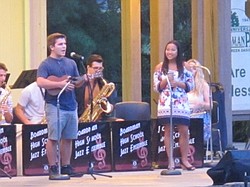 Neighbors | Zack Shively.Two students sing "Bring Me Sunshine" in the rain at Boardman Park on Aug. 24 during the Boardman High School Jazz Ensemble's Muisc in the Park concert. The band performed a wide variety of songs, ranging from big band to Sinatra to this ukulele song. 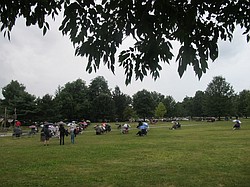 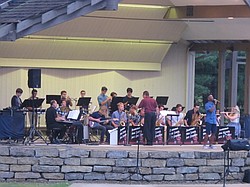 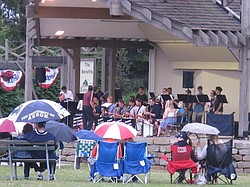 The jazz band began to play through a light drizzle, but they had to move further back on the stage when it started to rain harder after a couple songs. The band, led by enthusiastic director Thomas Ruggieri, included current students, as well as young adults who just graduated high school this year and alumni from a couple years back. The group comprised mostly of wind instruments, but they also had a keyboard, bass, drum set and guitar, which gave their band more power.

They opened the show with an essential composition, Glenn Miller’s “In the Mood.“ Most jazz bands play this song, but the band’s makeup allowed them to create their own twist on this classic tune, adding solos and a heavy bass noise. They reinterpreted many of the songs they played in a similar fashion, using musical techniques from rock ‘n’ roll, hip hop and funk to add a flavor to classic songs.

Their set list comprised of songs across many years, starting with Miller’s 1939 hit and closing with the Jiving Aces’s 2011 cover of the 1969 song “Bring Me Sunshine.“ They went way back on “Orange Colored Sky“ by Nat King Cole from 1930. Unlike many jazz bands, they included a recent tune, Trombone Shorty’s 2010 jam “Hurricane Season.“ The latter worked well with the band’s strengths as the song uses hip hop beats, a strong low brass and number of solos.

Ruggieri also set up the show with a number of genres. The songs they played were even stylistically different when they came from a similar time period. Along with songs from Miller and Cole, they included 1942’s “A Night in Tunisia“ by Dizzy Gillespie, which used a bebop sound as opposed to Cole’s swing music. They had a girl come out and sing the vocal part to the jazzy pop tune “Big $pender” by Peggy Lee from 1966 only a few songs after playing the funky, higher tempo “Soul Vaccination“ from Tower of Power’s eponymous album from 1973.

The concert concluded the Music in the Park concert series in Boardman Park for 2017.