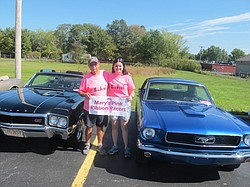 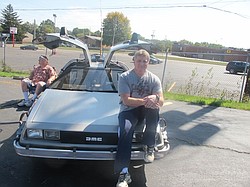 Neighbors | Zack Shively.Eagles Club member Jeff Sheridan brought his nephew's DeLorean, the car from "Back to the Future," to the Pink Ribbon Car Show. The Eagles Club sponsored the event. 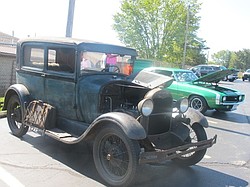 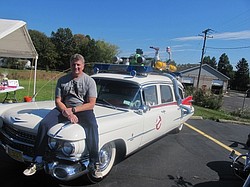 Neighbors | Zack Shively.Jeff Sheridan brought the show car owned by his nephew, Ryan Sheridan, to the Pink Ribbon Car Show on Sept. 22. The car is based on the "ECTO-1" car from "Ghostbusters." All proceeds from the event went to Relay for Life.

Organizers Rick Kubik and his niece Mandy Comstock decided to host the event because they wanted to raise more money outside of their other Relay For Life events. They named the team after Comstock’s grandmother, Mary, who had breast cancer.

Jeff Sheridan, also an Eagles Club member, brought his nephew’s show cars. He had the “ECTO-1” car from the “Ghostbusters“ movie and the DeLorean from “Back to the Future.“ Other cars on display included Mustangs and other hot rods and classics, like the Ford’s Model T. They also had bikes and trucks at the event. Altogether, enthusiasts brought 70 vehicles to the show.

Kubik and Comstock also planned other things outside of the show. They organized a play area for children, which had a bounce castle. A live DJ played classic rock songs throughout the event. They set up a food and drink area. They also had a raffle and bake sale.

All the proceeds went toward Relay For Life. They have only offerd this car show this year, but they want to make it an annual event.