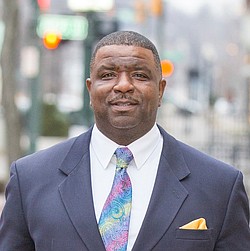 It was a straightforward question with only one correct answer. Three of the four candidates for mayor of Youngstown passed with flying colors. Unfortunately, the fourth tried a political dodge and wound up destroying his credibility.

Indeed, had Sean McKinney answered “Yes” to the question posed to him, Jamael Tito Brown, Janet Tarpley and Cecil Monroe, he would today be receiving The Vindicator’s support.

Instead, we endorse Brown.

What was the question that caused us to reassess our opinion of McKinney?

It was simply this: Should Mayor John A. McNally have resigned after he was convicted on four criminal charges?

He was permitted by the court to keep his job as mayor and also to seek re-election.

But while McNally received a tap on the wrist from the judge who presided over his case, voters in the May Democratic primary punished him.

Brown won the party’s nomination, thereby ensuring McNally’s departure at the end of the year.

The Vindicator declined to endorse the mayor in the primary on the grounds that his criminal conviction made him unfit to serve in government.

It, therefore, came as a surprise to us when McKinney chose political expediency in answering our question about McNally.

Here’s what he told the newspaper: The mayor made the best decision for him and his family and the Democratic Party, business leaders and other prominent individuals in the Mahoning Valley should have “pressured him to move forward.”

It seems to us that McKinney is

appealing to McNally’s supporters who were dismayed with his primary election loss and unhappy with Brown for making the criminal conviction a major issue in the race.

Indeed, Brown said that government corruption as exemplified by McNally’s criminal record was one of the reasons he decided to run for mayor.

deserve a mayor who would not cave to money, power or politics,” Brown said. “All the voters want is honesty.”

There is no greater issue confronting the city of Youngstown than government corruption. The ongoing state investigation into various downtown development projects undertaken by developer Dominic Marchionda has again turned the spotlight on the city.

Marchionda has pleaded not guilty to 100-plus criminal charges stemming from his alleged misuse of public dollars. His 73-page indictment by the Mahoning County grand jury implicates Youngstown Finance Director David Bozanich, who has not yet been charged.

In our interviews with all four candidates, we found that Brown and Mc-Kinney had the strongest grasp of the issues confronting the city and the most thoughtful solutions.

Both of these candidates have served in city government, Brown in council and McKinney in the administration.

But Youngstown cannot afford to be distracted by corruption in City Hall.

address the pressing issues of the day: a declining population; a shrinking tax base; a projected $2.5 million deficit in the operating budget; an unacceptably high crime rate; deteriorating neighborhoods; a school system fighting to emerge from academic failure; the need for decent-paying jobs.

These are all issues McNally has tackled in the three years and 10 months he has been in office. However, his criminal record has been a constant reminder of his role in the criminal enterprise that sought to prevent the county from purchasing Oakhill Renaissance Place, the former Southside Medical Center.

That is why The Vindicator has made McNally the focus of this election.

McKinney may have the most thoughtful solutions to the city’s problems, but his failure to issue an unequivocal statement about the mayor speaks volumes about his character.

Brown has assured us that he will have the most honest, transparent and open administration. We believe him – for now.

The Vindicator endorses Brown for mayor of Youngstown.