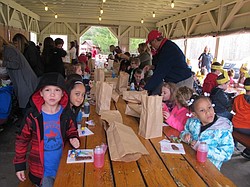 Neighbors | Alexis Bartolomucci.Students got a chocolate Easter Bunny and a drink after going on their egg hunt on April 5 at Boardman Park. 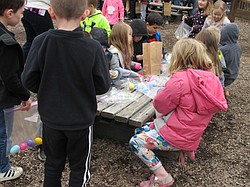 Neighbors | Alexis Bartolomucci.Boardman elementary students looked inside the eggs they found during the Boardman Kiwanis Easter Egg Hunt on April 5 at Boardman Park. 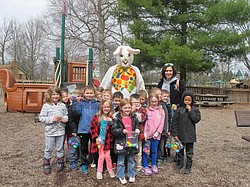 Neighbors | Alexis Bartolomucci.Krista Schmied and her kindergarten class got a picture with the Easter Bunny after they found their eggs at Boardman Park on April 5. 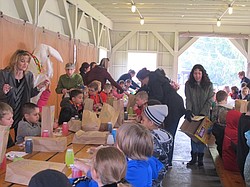 Neighbors | Alexis Bartolomucci.Boardman elementary students enjoyed a snack after they participated in the Kiwanis Easter Egg Hunt on April 5 at Boardman Park. 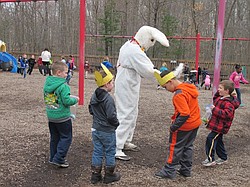 “In the early years, they used to hard-boil the eggs if you can imagine that,” said George Basista, Kiwanis Club member who organized the event.

Now that plastic eggs are used, the students get a special candy treat inside that the BHS students help put together. After the students collect their eggs, they go to the pavilion to enjoy a chocolate bunny from Giannos Candy Co. and a drink. The students are also given a coupon from Chick Fil A for a free treat.

“It’s really fun with the all kids because they are just so excited,” said Linh Tran, a senior Key Club student.

Tran helped out with the egg hunt last year along with other Key Club members. She enjoys volunteering because she gets to spend time with her classmates while helping out the Kiwanis Club and the younger students.

“It’s fun for the high schoolers just so we can interact with the younger kids and it teaches us to be civil and help the community,” said Tran.

The Boardman Kiwanis hosts different activities during the year to help out the community and students in Boardman schools.