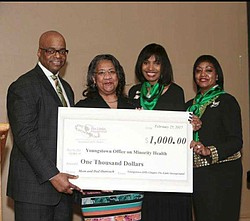 Above, Dr. Rodney E. Hill, left, honorary event chairman, presented a $1,000 donation to Leigh Greene of the Youngstown Office on Minority Health, to aid in reducing the infant mortality rate in Youngstown. Also presenting the check are Ruthie King, brunch chairman, and Marge Staples, The Links Inc. chapter president. Black Diamond recipients for 2017 are pictured below. SPECIAL TO THE VINDICATOR 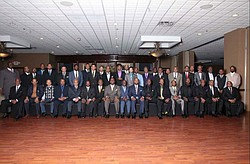 An estimated 500 guests attended the Black Diamond Leadership Brunch on Feb. 25 at Antone’s Banquet Center. The brunch celebrates the achievements of local African-American men, and is hosted by the Youngstown Chapter of The Links Inc.

Bishop Emmitt Nevels Sr. received The Black Diamond Legacy Award, which is a biennial recognition of achievement and community contribution.

A portion of the proceeds from the brunch will go to raising awareness of Ohio infant mortality rates, which are among the highest in the nation. Dr. Rodney E. Hill, an obstetrician/gynecologist, was the honorary event chairman and has served as a medical expert on the topic for the Ohio Commission on Minority Health.

A $1,000 donation was presented to Leigh Greene, executive director of the Youngstown Office on Minority Health, to encourage engagement of fathers of infants in an effort to reduce the mortality rate.