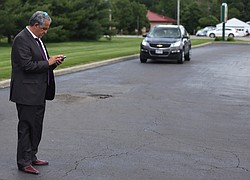 Tom Perez, the Democratic National Committee chairman, accused President Donald Trump of obstruction of justice by trying to get then-FBI Director James Comey to halt an investigation into Russia’s ties to the Republican president’s campaign.

“When you see the mountain of evidence accumulating that Donald Trump attempted to get Jim Comey to put a fork in the investigation” into the “Russian government and the obstruction of the 2016 election, it’s very troubling,” Perez, a former assistant attorney general for the Department of Justice’s Civil Rights Division, told The Vindicator in an exclusive interview Friday.

“What I find most troubling is he had nine different meetings with Jim Comey and our democracy was attacked when the Russians meddled in our election,” Perez said. “It wasn’t [mentioned] once, not once, when Donald Trump asked Jim Comey about what happened. The only thing he was concerned about was covering a certain part of his anatomy. He wasn’t concerned about this incredibly serious attack on our democracy.”

Perez added: “This is very serious stuff. It’s very clear [Comey] got fired because Donald Trump was fearful Jim Comey was going to throw the book at him.”

“I keep waiting for more Republicans to step up,” but “the leadership is aiding and abetting in the cover-up. History will judge them harshly.”

Perez was at Wedgewood Pizza in Boardman on Friday to speak to 75 people about getting Democrats elected for seats on local school boards, and to the White House, while criticizing Republicans.

Mahoning County is typically a Democratic stronghold, but it narrowly went for Hillary Clinton, the party’s presidential nominee in last November’s election, 49.9 percent to 46.6 percent.

When asked to explain why, Perez, a Clinton surrogate and former secretary of labor, said, “We have to do a better job of speaking more directly to the pocketbook issues that bring people to the ballot.

Before Perez came to Boardman, the Mahoning County Republican Party had a news conference with Trump supporters, including former Democrats and independents who voted for the president.

ShoMore DeNiro, a 23-year-old African-American woman from Canfield, said she voted in 2012 for Democrat Barack Obama, but voted for Trump last year.

“He’s not always politically correct, and I love that,” she said of Trump. “Obama was a pushover. He said what people wanted to hear. What I like about Trump is his bluntness. Once they get into politics, people change their ways, but he hasn’t changed. He’s not afraid to say what he means.”

In an email, Rob Secaur, the Ohio Republican Party executive director, wrote, “Ohioans have already rejected Perez’s politics, but his outrageous claims, failure to unify his party and obstructionist agenda are driving them further away.”