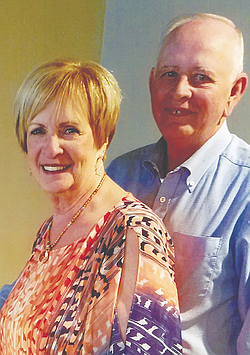 Al and Diane Barnett celebrated their golden anniversary June 9 at a surprise dinner celebration at The Manor banquet center. The event was hosted by their children.

Mr. Barnett and the former Diane Maurer were married May 6, 1967, at Honterus Lutheran Church, Youngstown.

The Barnett’s children are : Lisa (Michael) Cervone of Champaign, Ill.; and Kevin (Miranda) Barnett of Columbiana. They also have three grandchildren.

Mrs. Barnett worked for Hills and Ames Department Stores in sales and audit control until she retired in 2001.

Mr. Barnett worked as an insurance adjuster and appraiser for Grange Insurance and retired in 2010. He also served in the U.S. Army.

The couple are members of Boardman Baptist Church.