Scrappers come from behind to win in extras over Brooklyn 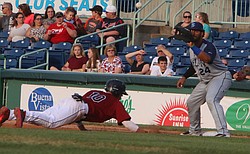 In recent years, home field has not provided the Mahoning Valley Scrappers with much of an advantage.

As for ninth-inning rallies and walk-off wins at Eastwood Field? Well, they have been almost non-existent.

However, on Wednesday in front of 2,601 fans, the Scrappers put together all sorts of late-inning magic. The result was a 5-4 win over the Brooklyn Cyclones.

The Scrappers (12-10) rallied from a 4-0 deficit, beginning with single runs in the fifth and eighth innings. They tied the game with a two-run ninth, then won it in the tenth on a Jason Rodriguez walk-off RBI double.

Rodriguez — who came off the bench in the eighth after Gianpaul Gonzalez was hit by a pitch — led off the bottom of the ninth with a home run to left-center.

“The guys rallied hard. It was fun watching them come back and put things together a couple of times in clutch situations,” Scrappers manager Luke Carlin said. “JRod coming off the bench and doing what he did, that’s just awesome.

“In our wins, it seems as though we have a different contributor every night. That’s really important. We stress that it takes a team to win. We even preach that at the Major-League level. So it has been awesome to see so many contributors.”

Brooklyn grabbed the early lead, scoring a pair of runs in both the second and third innings.

In the second, the Cyclones scored the game’s first run on a Jose Maria double which plated Walter Rasquin. Maria then scored on a Carlos Sanchez base hit.

The Scrappers began their comeback in the fifth on a Tyler Friis sacrifice fly that scored Jesse Berardi. Samad Taylor hit his second home run in as many nights in the eighth inning to cut the Scrappers’ deficit to 4-2. In the ninth, Rodriguez’s home run was followed by a Friis single. Friis eventually scored to tie the game at 4-4 on a Taylor groundout.

The Cyclones opened the top of the tenth with a Rasquin triple followed by a Maria walk, but Mingo worked out of the jam.

“Wow, our bullpen has been great,” Carlin said. “They have been put in some tough situations, and they keep coming up big. Mingo really showed something tonight.”

Nolan Jones walked to lead off the bottom of the tenth, which set the stage for Rodriguez’s one-out heroics.

“Every win is important, but this was big to come back home and win two straight after hitting a speed bump in Williamsport,” Carlin said.

The Cyclones entered Wednesday’s game against the Scrappers with the worst batting average (.226), earned run average (5.35) and record (6-15) in the New York-Penn League.

The Scrappers will look for the three-game sweep against the Cyclones tonight at 7:05.