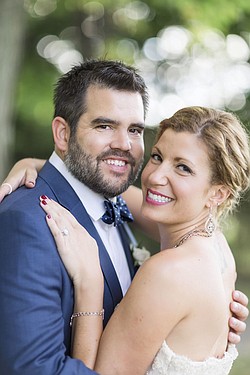 Lisa Marie Halko and Justin Cruz were married Oct. 15 at Amelita Mirolo Barn in Upper Arlington, Ohio. The bride is the daughter of Robert Halko and Judy Halko, both of Canfield. The groom is the son of Karen Cruz of Commerce, Ga.

The 3 p.m. ceremony was officiated by Dave Coughlin, and a reception followed at Raymond Memorial Golf Course in Columbus.

The bride wore a champagne-colored strapless A-line silhouette gown with a satin-wrapped empire waist, a beaded-lace overlay and a scalloped sweetheart neckline. The bodice was adorned with crystals, and it was completed with a scalloped semi-chapel train.

Bridesmaids were Angela and Theresa Halko, the bride's sisters; Danielle Bader and Alicia Mullins, the bride's cousins; Kristina Cruz, the groom's sister; and Amanda Ellis, the groom's cousin. The groom's niece, Briley Thomas, was the flower girl. The attendants wore a variety of neutral-colored dresses.

Mrs. Cruz graduated from Youngstown State University with a master's degree in education. She is a counselor at Cuyahoga Community College in Parma, Ohio.

Mr. Cruz graduated from University of Central Florida with a bachelor's degree in business administration and is a district manager for Boston Beer Company in Cleveland.

The couple traveled to Grand Cayman Islands for their wedding trip. They reside in Westlake, Ohio.