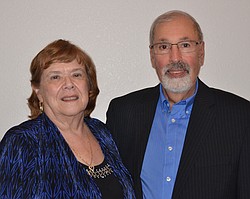 Larry and Diane Baughman of Poland celebrated their 50th anniversary with a party Feb. 11 at Bruno’s Restaurant. Their daughters Lori (Mark) Casey of Poland, and Sheri (John) George of Howland, hosted the celebration.

The Baughmans have five grandchildren: Ryan, Erika and Connor Casey and Jesse and Joshua George.

Mrs. Baughman is a homemaker and a member of Trailwood Gardeners and Poland Historical Society.

Mr. Baughman retired from General Electric in 2000 as a manufacturing engineering manager. He also is a member of Poland Historical Society. The couple are members of Poland Presbyterian Church.