The Zarlengas to celebrate 70th anniversary 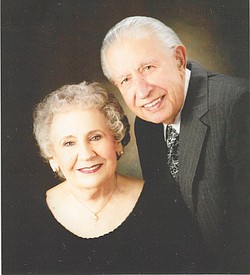 A celebration of the 70th anniversary of Mr. and Mrs. Dante Zarlenga will take place Aug. 23 in Concord, hosted by the couple’s children.

Mr. Zarlenga and the former Joann DiLallo were married Aug. 23, 1947, at St. Edward Church in Youngstown.

Mrs. Zarlenga worked for the May Co. in Mentor for 17 years until she retired.

Mr. Zarlenga owned and operated Zarlenga Industries Inc., Mentor, for 25 years until he retired. He is a U.S. Navy veteran and served during WWII as a signal man in the European, Mediterranean and Pacific theaters.

The couple are members of St. Bede Church in Mentor and both enjoy exercise, casinos and time with family, and often visit friends in Youngstown.