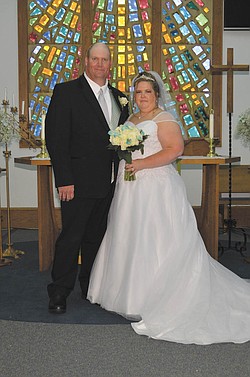 Jennifer J. King and Douglas R. Moore were joined in marriage by the Rev. Larry Klinker at a 2:30 p.m. ceremony July 16 at Zion Lutheran Church. A reception followed at The Embassy in Poland.

Darla King of New Middletown is the mother of the bride, and Neal and Debbie Moore of Alledonia, Ohio, are the parents of the groom.

The bride wore a tulle dress with beaded cap sleeves and a sweetheart neckline. It featured asymmetrical beaded lace appliques. Lace flowers from the bride’s mother’s gown were added to the bodice.

Mrs. Moore graduated from Youngstown State University with a bachelor’s degree in criminal justice. She is a 911 dispatcher for Beaver Township Police Department in North Lima.

Mr. Moore is an Ohio partner and fifth generation cattleman at Scenic Way Farms in Alledonia.

The Moores visited the New England states for their wedding trip and reside in Alledonia.