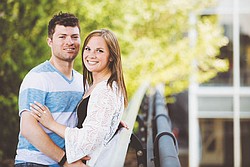 Joe and Patti Koch of Austintown are announcing the engagement of their son, Joseph Koch Jr. of Austintown, and Taylor Vukovich of North Canton, Ohio.

The bride-elect is the daughter of Ross and Judi Vukovich, also of North Canton.

The couple will exchange vows at 12:30 p.m. Oct. 8 at St. Paul Catholic Church in North Canton.

A reception will follow at the Hilton Akron/Fairlawn in Akron.

Invitations will be issued for both.

Miss Vukovich earned a bachelor’s degree in biosystems engineering from the University of Kentucky. She is a CAPA engineer at Zimmer Biomet in Dover, Ohio.

Mr. Koch earned a bachelor’s degree in construction management from Kent State University. He is a superintendent for Joe Koch Construction in Austintown.