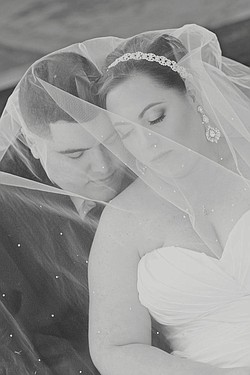 Eric Hauter officiated at the 1 p.m. March 28 wedding of Ashley Mrosko and Manuel Figueroa at The Butler North. A reception followed at The Lake Club in Poland.

The bride wore a diamond white satin gown with a sweetheart neckline. It featured a pleated bodice, lace-up back and bead accent on her hip. The ensemble was completed by a full draped skirt with a modified cathedral length train and veil.

The bride is the daughter of John and Rita Mrosko of New Middletown. She earned a bachelor’s degree in nursing from Youngstown State University and is a registered nurse at Salem Regional Medical Center.

Her husband, the son of Terry and Aida Gongaware of Salem and Edwin Figueroa of Poland, is a journeyman tool and die maker. He works in production at General Motors in Lordstown.

The couple will travel to Puerto Rico in June for their honeymoon. They live in Salem.