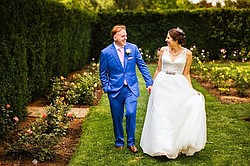 Sarah Dahman and Michael Carlos exchanged wedding vows at 3 p.m. during a June 13 ceremony at Kidston Pavilion in Fellows Riverside Gardens. The bride’s brother, Paul Dahman, officiated, and a reception followed in the Grand Lobby of Powers Auditorium at DeYor Performing Arts Center.

The couple honeymooned in New Orleans and reside in Astoria, N.Y.

The bride is the daughter of James and Donna Dahman of Canfield, and the groom is the son of Michael Carlos of West Hempstead, N.Y., and Noreen Kelty of Floral Park, N.Y.

The bride’s gown featured a lace bodice and tulle skirt. She wore a tiara worn by her mother and paternal grandmother on their wedding days.

Serving as the ring bearer was Brady Smith, a cousin of the groom.

The bride graduated from Boston University with a bachelor’s degree in international relations. She is employed as operations manager for Better Cloud in New York City.

The groom, also a Boston University graduate, received a bachelor’s degree in sociology. He is employed as a human resources coordinator for Compass Rock Real Estate in New York City.