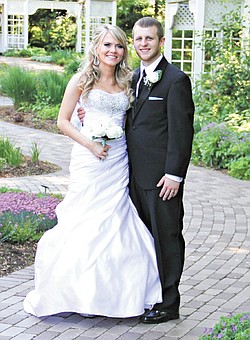 Valerie Grate of Columbiana and Dominic Williams of North Lima exchanged wedding vows in a 1 p.m. ceremony May 23 at New Life Assembly, where a reception followed. The Rev. Keith Bruner, the groom’s uncle, officiated at the ceremony.

The couple reside in Youngstown after a wedding trip to Ocean Isle Beach, S.C.

The bride’s draped white satin A-line gown was fashioned with a jewel-encrusted, cross-shaped bodice and a lace-up back. The strapless gown featured a sweetheart neckline and a chapel-length train.

The groom’s sister Olivia Gallaugher was the flower girl.

Jake Kohler served as the best man, and groomsmen were Austin Burkholder and Brandon Burkholder, cousins of the groom; Zachary King, cousin of the bride; Josh Williams, brother of the groom; and Wally Kukla.

Zane Betz, cousin of the bride, was the ring bearer, and ushers were Tyler Grate and Adam Grate, cousins of the bride.

The bride, a daughter of Charles “Sam” and Debra Grate of Columbiana, is employed by Homes for Kids in Niles.

She graduated from Youngstown State University with a bachelor’s degree in social work.

The groom is a son of Angela Gallaugher of North Lima, and Bob and Lisa Williams of Calcutta.

He is an intern for American Standard in Salem while studying engineering at YSU.