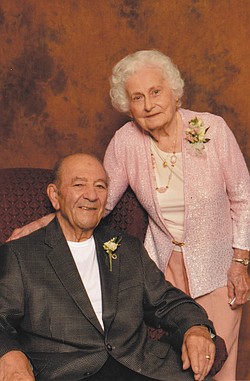 Louis and Dorothy Pizzuto of Liberty celebrated their 70th wedding anniversary with their family during a dinner July 25 at The Fifth Floor in Youngstown.

Hosting the event were the couple’s daughters, Josephine (John) Dyer of Newton Falls and Janet (Frank) Slovasky of Liberty.

The couple are members of Our Lady of Mount Carmel Basilica in Youngstown.

Mrs. Pizzuto, a homemaker, is a member of the church’s St. Monica Guild and seniors club and Commercial Intertech Retirees.

Mr. Pizzuto retired in 1986 after 40 years with Commercial Intertech, where he worked as a jig and fixture maker.

While he was employed, he was an active member of the local Steelworkers union, where he served three terms as the local’s president.

He is a member of the church’s vestibule club, seniors club and Commercial Intertech Retirees, where he is president.

The former Dorothy Turchan and Mr. Pizzuto were united in marriage July 21, 1945, at St. Nicholas Byzantine Catholic Church in Campbell.

The Pizzutos renewed their vows June 14 in a ceremony officiated by Bishop George V. Murry at St. Columba Cathedral in Youngstown.