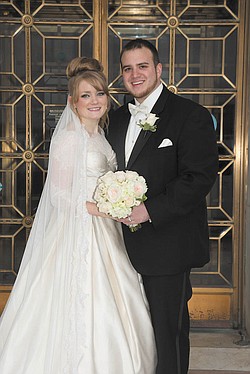 Ruth Ann Madden and Peter Joseph Rassega II were united in marriage in a 2 p.m. ceremony Nov. 1, 2014, at Our Lady of Mount Carmel Basilica.

Monsignor Michael Cariglio officiated over the ceremony, and a reception followed at Drake’s Landing in Canfield.

After a honeymoon in Walt Disney World and Curacao, the couple reside in Youngstown.

The bride is the daughter of John and Ruth Madden of Canfield, and the groom is the son of Marjorie Rassega of Mineral Ridge and Peter and Lynnae Rassega of Boardman.

The bride’s ivory gown was fashioned of silk duchess satin and featured a pleated sweetheart neckline and an inverted pleated ball gown skirt. A cathedral-length veil incorporated lace from her mother’s wedding gown. Jaclyn Madden, sister of the bride, and Paige Rassega, sister of the groom, served as honor attendants. Bridesmaids were Christie Madden and Candace Madden, sisters of the bride, and Nicole Stepsky.

Karly Kelly, a cousin of the groom, participated as the flower girl. Attendants wore mocha-colored dresses.

The groom’s brother, Pierce Rassega, served as his best man, and groomsmen were Frank Hayes, a cousin of the groom; Jonathan Terleski, brother-in-law of the bride; Jason Ferguson; and David Avery.

Serving as the ring bearer was Nathan Adams, a cousin of the groom. Ushers were the groom’s brothers Mason Rassega and Max Rassega.

The bride received a bachelor’s degree in psychology and a master’s degree in education from Youngstown State University. She is employed as an enrollment services specialist for Northeast Ohio Medical University in Rootstown.

The groom received a bachelor’s degree in business administration from YSU. He is employed as a customer service manager for J & M Technologies in Canfield.