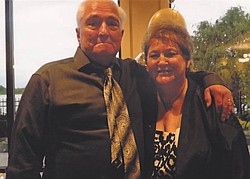 Mr. and Mrs. Robert Rock of New Middletown celebrated the 50th anniversary of their wedding at a party Aug. 24 by invitation at Drake’s Landing in Canfield.

Hosting the celebration were the couple’s children: Tracy Rock of Poland, Robert Rock of North Lima, and Michael and Cheryl Rock of Struthers.

Mrs. Rock, the former Genevieve Ravotti, worked as a cafeteria cook for Boardman Schools before retiring in 2007.

Mr. Rock retired in 2000 from Cold Metal Products, where he was an operator.

The couple are members of St. Paul Church in New Middletown.